Commonly referred to as the pine marten, the American marten was once believed to be extirpated in Michigan but now has a healthy population.

Records show the American Marten extirpated in the 1930s. However, efforts for their recovery began as early as 1958 and then redoubled in the 1970s.

After a recent review of the endangered species list, the marten was deemed recovered with a sustainable population.

The marten has a long slender body with glossy brown fur and a long bushy tail. A member of the weasel family, it ranges from 24-30 inches in length, including its tail. Like a cat, the marten has semi-retractable claws which enable it to easily climb trees. Relative to its weight, the marten has large footpads which allows for easy walking across deep snow.

The marten is most active during the night, early morning and late afternoon. As omnivores, martens eat both plants and animals. Mice, chipmunks, red squirrels, fish, frogs, insects, berries and nuts are on its menu.

Solitary creatures except for breeding, martens will mate with more than one partner in their lifetime. Males will defend a territory of one to three square miles. Born naked and blind, the marten will be full grown around 3 months old and shortly after are on their own from their mother.

The average lifespan of the marten in the wild is anywhere from six to twelve years.

The American marten was originally thought to only prefer coniferous forests, but now have been known to live in both evergreen and leafy forests. 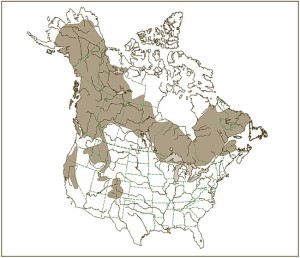 The range of the American marten

Due to their highly shiny and luxuriant fur, the marten’s pelts were and still are highly desired. Now, strict hunting laws are in place to ensure the survival of the marten.

Deforestation is still a threat to the marten. Considered to be mainly arboreal, martens need dense forests for survival.

The American marten in the snow

For more information about the American marten in Michigan, click here.