In some instances, the occurrence of a wildfire can mean devastation for species with restricted ranges and population; however, for one of Michigan’s rarest warblers, fires are crucial for building its niche habitat and sustaining the population. The Kirtland’s warbler is a member of the Parulidae or New World warbler family which measures about six inches in length and is distinguishable by the striking yellow plumage on its throat and breast and split white eye rings. As is the case with many of Michigan’s bird species, the Kirtland’s warbler nests in parts of the Upper and Lower Peninsulas during the summer months and makes the long journey to the south for the winter months – in this case a 1400 mile trip to the Bahamas. While it may seem as though this long-distance flight would be the toughest part of life as a Kirtland’s warbler, the largest challenge this population faces comes from its time up north.

Although not immediately obvious by the forested landscapes known today, Michigan’s history is one of expansive barrens and frequent fires. Many grassland and barren species adapted to this cycle of burnings, one of which is the fire dependent jack pine tree. Heat is necessary to the lifecycle of the jack pine, as it promotes the tree’s cones to fully open and successfully germinate. With the suppression of fire, young stands of jack pine become less and less common and old stands grow dense and tall, losing their lower branches due to lack of sunlight. The degradation and succession of the jack pine ecosystem reasonably follows this lack of fire, but what was not suspected was the subsequent decline in the Kirtland warbler population.

According to the DNR, Kirtland’s warblers nest in young jack pines on branches that essentially touch the ground, where they can hide their nests among dense thickets of pine and grasses. In order for these conditions to occur, the pines must be young and small so that sunlight can reach the ground and keep the lower branches of the trees alive. This also requires the occurrence of frequent fires to remove older trees in exchange for the germination of their cones. Without these fires, the selective female warblers will refuse to nest and, according to the Cornell Lab of Ornithology, only single male warblers will continue to live in the old, successional stands. Another major benefit of hiding nests in the lower branches of young jack pines is protection from the parasitic brown headed cowbird, which will remove warbler eggs from the nest and replace them with eggs of its own.

Today, with the importance of fire and the jack pine to Kirtland’s warbler populations known, effort is being placed to conserve this habitat and the warbler population. Several of MNA’s sanctuaries house populations of jack pine, including Redwyn’s Dunes Nature Sanctuary, and today birders can view this rare bird through tours given by the Kirtland’s Warbler Recovery Team. According to the DNR, the best way to support this endangered species is to educate yourself and those around you through research or attending birding tours, as well as to donate to local organizations, like the Michigan Nature Association, dedicated to protecting and rebuilding the warbler population.

Bald eagles: A conservation success story (Mother Nature Network): Bald eagles in the United States are making a recovery. A pesticide called Kepone nearly wiped out the species in the 1960s and 1970s. Since then, the bald eagle has slowly been making a recovery, and was taken off the endangered list in 2007. Invasive species and other pesticides still threaten the bald eagle, but restoration efforts are ongoing. Bald eagles reside all across the United States, but are thriving the most along the James River in Virginia.

Great Lakes panel still waiting for legislative action on lake levels (Journal Sentinel): The Great Lakes Commission is still waiting on a request passed in 2007 to have the U.S. and Canadian governments figure out how to slow down the water flow in St. Clair River, which is heavily dredged. This would raise water levels on Lake Michigan and Lake Huron. The water levels of these lakes today is almost two feet lower than they would be if not for human interaction in St. Clair River. Some officials suggest an adjustable system that would allow the water flow to open or slow down on the river.

USFS: Hunter caused huge wildfire near Yosemite (Detroit Free Press): An illegal fire set by a hunter in Yosemite National Park is what caused the massive wildfire that covered 371 square miles and cost $81 million to contain. The hunter has not yet been arrested, as investigations are still going on. The U.S. Forest Service had banned fires in Yosemite National Park outside of controlled camping areas because of the high risk of wildfire. Officials say the wildfire is now 80 percent contained, having destroyed 111 structures since it started.

Climate change may speed up forests’ life cycles (Science Daily): A study conducted by a Duke University team suggests that in response to global warming, the life cycles of tree species are speeding up. One professor at Duke University, James S. Clark, said because of climate change, there are longer growing seasons for the trees and hotter temperatures. Studies conducted on 65 tree species in the 31 eastern states of the U.S. suggest that there is a higher rate of turnover in warmer climates. There are more young trees. Scientists believe eventually trees will migrate to cooler climates by seed dispersal.

Pollution in Florida’s Lake Okeechobee swells to near-disaster levels (Mother Nature Network): Lake Okeechobee in south Florida is one of the largest lakes in the United States, and is also one of the shallowest. At nine feet deep on average, the lake is potentially an environmental disaster because of its rising water level. Heavy downpour has caused the lake to rise to 15.5 feet, which some fear is too high. Already, the inflated lake has sent polluted runoff into nearby water systems. The polluted runoff is assisting the growth of toxic algae, which can kill many freshwater organisms. The pollution in the lake is also hurting tourism to the area and real estate prices. 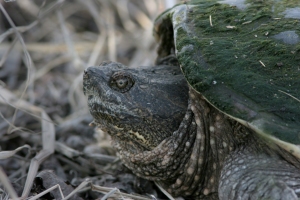 Snapping turtles finding refuge in urban areas while habitats are being polluted (Science Daily): Snapping turtles’ habitats are being destroyed by pollution and land development, which is causing them to move into urban areas. Many people are hesitant to encounter a snapping turtle. Bill Peterman, a post-doctoral researcher at the University of Missouri, assures that the animal will only bite when provoked. Peterman also suggest that the way to get snapping turtles back to their habitat is for people to use fewer chemicals that eventually end up in waterways. Using fewer chemicals would also benefit the habitat as a whole as it would restore the snapping turtles to their rightful place, which would put the ecosystem back in balance.

Michigan’s recycling rate is lowest in Great Lakes region (Great Lakes Echo): Michigan’s recycling rate is 10 percent lower than the regional average. Governor Rick Snyder said in 2012 that increasing recycling is one of his top priorities. Kerrin O’Brien, executive director of the Michigan Recycling Coalition, believes part of the problem is that people in Michigan have limited access to recycling sites and find it inconvenient. She also said Michigan needs a significant culture shift to start participating in more recycling programs.

Otters aid seagrass recovery (Conservation Magazine): The harmful effects of fertilizer pollution on seagrass are offset by otters. Runoff from farms enters the water and damages seagrass, which is important to the marine ecosystem. Otters contribute to the recovery of seagrass by feeding on crabs. In turn, not as many crabs feed on sea slugs. The abundance of sea slugs graze on algae, which helps the seagrass grow.

By Adrienne Bozic and Chelsea Richardson 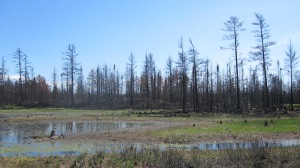 Some of the fire damage at Swamp Lakes Moose Refuge. Photo by Adrienne Bozic

On May 23, a lightning strike sparked a wildfire that burned more than 21,000 acres in the eastern Upper Peninsula, the third largest Michigan wildfire in modern history. This fire burned for 20 days before it was considered 100 percent contained.

The toll on local homeowners was devastating; the fire destroyed 136 structures, including 47 homes, a store, and the famous Rainbow Lodge at the mouth of the Two Hearted River. The fire stretched all the way to Lake Superior, almost thirteen miles north of its southern extent. At final tally, the fire burned 21,069 acres, making it the third-largest wildfire in modern Michigan history after the 25,000-acre Mack Lake Fire (1980) and the 72,000-acre Seney Fire (1976).

A total of 300 personnel assisted with the Duck Lake Fire, building 42.6 miles of fire line, almost half of them dug by hand. Cooperating agencies included the Michigan State Police, Luce County Sheriff’s Department, Luce County Emergency Management, Wisconsin DNR, American Red Cross and Salvation Army. Many news reports noted that Luce County and Newberry residents would line the streets in the evening as fire personnel drove home for the night, cheering loudly and holding signs thanking them for their hard work. 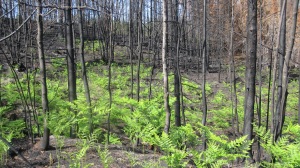 Some signs of life at the sanctuary as bracken fern sprouts from the soil. Photo by Adrienne Bozic

Many natural areas in Luce County were affected by the fire, which can have potentially positive ecological responses in fire-adapted ecosystems such as those found in the Duck Lake fire area. Many ecosystems throughout Michigan are fire-dependent and require periodic fire to maintain their specific ecology and function. According to the DNR website, prescribed fire is also used to maintain habitats such as prairies. Many endangered species depend on warm season grasses and prairie remnants for their survival. Fire is also used to maintain large openings and oak savannahs. Savannahs are open, park-like areas with scattered trees. These areas need periodic fires to keep brush and trees from turning them into a forest.

A portion of MNA’s Swamp Lakes Moose Refuge was burned in the Duck Lake fire. On June 26, MNA’s Upper Peninsula Regional Stewardship Organizer Adrienne Bozic visited the sanctuary to survey the fire damage. Approximately 40 acres of the 160-acre sanctuary were affected, mainly along the southern tier of the property. The fire exhibited interesting behavior south of Pike Lake, possibly due to varying forest types present which have differing levels of combustibility and burn at different rates. For example, in Swamp Lakes, the fire abruptly stopped at areas dominated by broad-leaved hardwoods such as maple, which presumably formed a fire break of less-flammable material. END_OF_DOCUMENT_TOKEN_TO_BE_REPLACED