It’s almost hard to believe that a tiny, graceful creature could fly out of a chrysalix. Yet every year, the butterfly continues its phenomenon, metamorphosing from a mere bumbling, crawling caterpillar into a sleek, graceful winged insect. 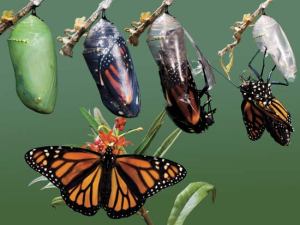 A monarch butterfly emerges from its chrysalis. Photo courtesy of kids.britannica.com.

The butterfly begins its life in a small ovoid-shaped egg, developing into a caterpillar. The caterpillar grows and hatches out of its egg and must start eating in order to grow. The caterpillar sheds its smaller skin a few times during growth before it begins the “pupa” stage. It forms the chrysalis, the casing formed around its body to undergo metamorphosis. The final stage is when the newly formed butterfly emerges from its chrysalis, no longer a ground-anchored insect.

For more details about the butterfly’s life cycle click here.

Here are some butterflies common to Michigan, that can be spotted while enjoying Michigan’s nature. 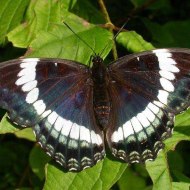 A monarch feeds on a flower. Photo courtesy of monarch-butterfly.info.

The White Admiral has a 2.25-4 inch wingspan and has a white band in the middle of both wings. Hind-wings also may have a row of blue dashes or red dots toward the edges. The White Admiral is usually found in Northern deciduous evergreen forests. This butterfly likes to eat rotting fruit and nectar from small white flowers.

The Giant Swallowtail boasts a wingspan of up to 6 inches, making it one of the largest of its species. The swallowtail can be spotted as a black winged-insect with yellow spots on its edges creating a band across them. The Giant Swallowtail chooses rocky and sandy hillsides near bodies of water. This butterfly likes to get its nectar from several plants including goldenrod, azalea and swamp milkweed.

The Monarch is a well-known butterfly with an interesting history. This butterfly is known to migrate from the north to the south including places in California and Mexico during the harsh, northern winter months. The Monarch has black and orange wings with white dots near the margins. The Queen butterfly who is a close relative is often mistaken for a Monarch but is also commonly spotted in Michigan. Monarchs are particular to milkweed plants. 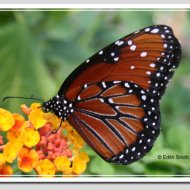 The Queen butterfly looks similar to the Monarch. Photo courtesy of butterflyfunfacts.com.

The Silver Spotted Skipper shares nectar from a flower with a bumblebee. Photo courtesy of spicebush.blogspot.com. 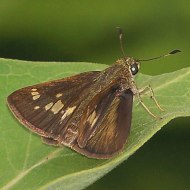 A Little Glassywing butterfly sits on a leaf. Photo courtesy of naba.org.

The Silver Spotted Skipper has a small wingspan which can be up to about 2.5 inches. Its wings are a mixture of brown and black, with transparent gold spots and a metallic silver band. They reside in disturbed and open woods, streams and prairie waterways. This butterfly avoids feeding on any yellow flowers but instead eats plants like everlasting pea, common milkweed and thistles.

The little Glassywing has an even smaller wingspan than the Silver Spotted Skipper, which can be up to 1.5 inches. The wings are a combination of brown and black like the Skipper. These butterflies prefer to feed on white, pink and purple flowers including common milkweed and peppermint. These butterflies like to live near shaded wood edges.

A Mitchell’s Satyr butterfly on a green leaf. Photo courtesy of treehugger.com