The Great Lakes hold 20 percent of all surface freshwater on the planet, providing drinking water for 30 million people. The Lakes are home to a fishery worth $7 billion annually and multiple species, including threatened and endangered animals. The Great Lakes are crucial to the economies of the surrounding states. 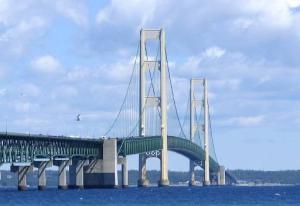 Recently, the National Wildlife Federation wrote an article about the old pipeline that runs under the Mackinac Bridge under Lakes Michigan and Huron. The pipeline is 60 years old and carries 22 million gallons of crude oil and natural gas fluids daily across the Straits of Mackinac. The 60-year-old pipeline is part of the Lakehead Pipeline System that carries crude oil to refineries in the Great Lakes region.

“We are dealing with a 60-year-old pipeline in one of the most sensitive areas of the world, and it carries one of the dirtiest, most toxic types of oil on the planet – tar sands-derived crude,” said Andy Buchsbaum, director of NWF’s Great Lakes Regional Center in Ann Arbor.

Tar sands oil is heavier than traditional crude, which increases the likelihood of ruptures because the pipelines are designed to transport lighter conventional crudes. Tar sands oil contains more cancer-causing chemicals, emits more greenhouse gases when burned, and is harder to clean up because it can sink in water. In the forests of western Canada, it has poisoned local waters, killed wildlife, and threatened human health.

According to government officials, the pipeline (Line 5) crossing the Straits has never leaked. However, there is good reason to believe a rupture is possible in the future. The pipeline is partially owned by Enbridge, Inc., a Canadian-based oil transporter. The company has a history of careless maintenance and frequent oil spills. Recently, an Enbridge Partners pipeline ruptured and dumped 1 million gallons of tar sands crude into the Kalamazoo River. The spill sickened over 300 people, killed numerous fish and birds in the area, and disrupted the river’s ecosystem. The cleanup will cost an estimated $1 billion. Enbridge Inc. pipelines have suffered nearly 800 spills in the United States since 1999.

The National Wildlife Foundation wants Enbridge to replace the 60-year-old pipeline, and they have also filed a petition asking the U.S. Environmental Protection Agency to stop shipments of tar sands-derived crude through any U.S. pipelines until safety regulations are improved.

If the pipeline were to rupture, it would cause significant damage to numerous types of wildlife in Michigan. For more information, see the article that appeared in National Wildlife magazine.

In Great Lakes, Reports Offer Reassurance and Warnings About Oil Pipeline Safety (Circle of Blue): Recent studies from the National Research Council contradict the previously-believed corrosive nature of some oil compounds. The three studies focused on diluted bitumen, a heavy oil mined in Alberta. Recent ruptures and leaks in U.S. pipelines transporting diluted bitumen from Canada have raised concern that the compound may be more corrosive and difficult to move than conventional crude oil. Though researchers have found bitumen to have no unique corrosive properties or greater spill risk than crude oil, the compound continues testing. 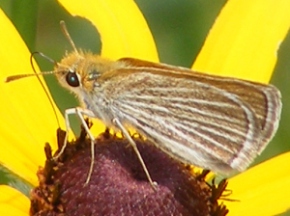 Researchers work to save endangered prairie butterfly (Toronto Star): Researchers in the U.S. and Canada are searching for ways to stop a rapid population decline among the poweshiek skipperling, a once-common prairie butterfly. The brown, moth-like insect was once common in areas of Canada and the Midwest but, as prairie habitats began to diminish, the species’ population suddenly shrunk to alarmingly low numbers. Researchers are cautious yet optimistic about the poweshiek skipperling’s rehabilitation and are working to prevent some wildfires and farming practices that are currently devastating to the species.

Michigan’s native plants are essential in preserving the state’s ecosystem (Great Lakes Echo): Detroit native Cheryl English maintains an extensive home garden not only to add beauty to her neighborhood, but also to share the necessity of Michigan’s native plants. English’s yard stands out among the rest on her East English Village block, as her front and back lawns are covered with Michigan-native plants, including various bushes, shrubs, cacti and wildflowers. One of the main lessons English hopes people will learn from her garden is the environmental significance of native plant life and how every species plays an important role in its ecosystem. 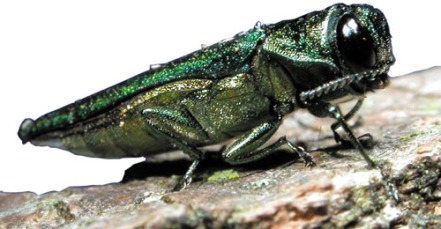 Little Things, Big Problems: Emerald Ash Borer (Great Lakes Echo): The Great Lakes Restoration Initiative is producing a series of educational videos on the emerald ash borer, an invasive beetle species that originated from Asia and eastern Russia. The series emphasizes the harmful effects of the beetle, which lays its larva in ash trees and has killed a total of 40 million of these trees in the United States. It is critical that people know their role in the spreading of emerald ash borer and that they prevent the spread of the insect by never moving firewood to or from other areas.

Conservationists are peeping mad about birdsong apps (Mother Nature Network): Smartphone apps that play audio of bird calls have drawn attention from conservationists in England, as many park visitors are using the sounds to draw birds from their nests in order to photograph them. Conservationists argue that this distraction prevents birds from performing necessary duties, such as protecting their young. Still, some enthusiasts believe that bird watching apps help draw a wider audience to the hobby, allowing more people to better understand and enjoy nature.

New Big-Nosed Horned Dinosaur Found in Utah (National Geographic News): Paleontologists in Utah have discovered a new dinosaur, Nasutoceratops titusi. The dinosaur, a Triceratops relative, is a member of a group of horned, four-legged herbivores called ceratopsids. This newly discovered species is especially interesting to researchers because, though most known ceratopsids resemble the Triceratops, the new dinosaur looks quite different, with a large nose and curved horns over its eyes.