Every Friday, MNA gathers news related to conservation and the environment that has happened throughout the state and country. Here are a few highlights of what happened this week in environmental news:

Deadly bat fungus found in Michigan may lead to mass die-off, crop damage and mosquito bites (mlive): A deadly bat fungus has been identified for the first time in Michigan. It could dramatically reduce the state’s bat population and have an effect on the agricultural industry. The fungus, called white-nose syndrome, causes skin lesions that can interrupt hibernation patterns. Scientists have predicted up to 90 percent of the bats susceptible to the disease may die off in the next three to five years. A large bat die-off could lead to more mosquito bites for Michigan residents and the loss of a natural pesticide service for farmers.

State officials launch tourism initiative to promote trail network (Great Lakes Echo): In order to make trails in Michigan easier to find for tourists, the Department of Natural Resources wants to provide information for all trails in Michigan at the click of a button. A package of five bills was introduced that would label all trails as Pure Michigan trails. Cities hope that this will help increase tourism in their towns.

Michigan Mercury Collection Program keeps potentially hazardous mercury from reaching Michigan landfills and waterways (mlive): The Environmental Quality Company and the Michigan Department of Environmental Quality for the Great Lakes Restoration Initiative Mercury Collection project have teamed together to provide free mercury collection services to residents and businesses in Michigan. If the mercury enters landfills, it can reach the water and the air and cause mercury pollution. 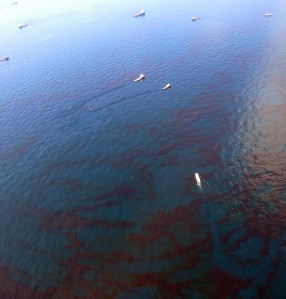 The 2010 BP oil spill in the Gulf of Mexico still has detrimental effects marine life living there. Photo courtesy of Wikimedia Commons

Wildlife in Gulf of Mexico still suffering four years after BP oil spill: report (the guardian): Four years after the oil spill, the report from the National Wildlife Federation found that some 14 species still showed symptoms of oil exposure. The oil is sitting at the bottom of the gulf and washes up on the beaches. There is also some oil still residing in marshes. There has been a high report of animal deaths, with more than 900 bottlenose dolphins being found dead or stranded in the oil spill area since April 2010. NWF scientists said it could take years before the full effects of the oil spill were understood.

Salamander’s Hefty Role in the Forest (The New York Times): Woodland salamanders are a large asset to forests; on an average day, a single salamander eats 20 ants, two fly or beetle larvae, one adult beetle and half of an insect. Collectively, salamanders affect the course of life in the forests in which they live. They play a significant role in the global carbon cycle by eating the invertebrates that spend their lives ripping leaves to bits and eating them, which consists of about 47.5 percent carbon.

Every Friday, MNA gathers news stories related to conservation and the environment from around the country. Here is some of what happened this week in environmental news:

Review panel questions US plan to take gray wolf off endangered list (the guardian): There was a setback on the proposal to lift protection for gray wolves in the U.S. Federal wildlife officials want to remove the animals from the endangered species list across the lower 48 states. A peer review panel said that the government was relying on unsettled science and their claim that the Northeast and Midwest were home to a separate species of wolf, making gray wolf recovery in those areas unnecessary.

Record levels of banned insecticide found in Illinois otters (Great Lakes Echo): A study published in the journal “Ecotoxicology and Environmental Safety” found high levels of chemical compounds in 23 otters in Illinois, the most troubling one being dieldrin. Dieldrin, which has been a banned insecticide since 1978, is linked to neurological, behavioral  and immune suppression problems in wildlife.

Michigan’s widespread toxic fish problem redefines ‘catch and release’ (mlive): Mercury and toxic PCBs (chemicals used for coolants in transformers) emitted in the atmosphere rain down on Michigan’s lakes which contaminate wildlife and pose a threat to people if they consume too much fish. The Michigan Department of Environmental Quality has drafted plans for reducing the levels of these contaminants. This will require cutting global PCB emissions by 94 percent and getting there could take 50 years.

Obama in East Lansing: His signature will change face of food stamp and farm program (mlive): President Barack Obama signed the Farm Bill in East Lansing on Friday and it will have major impacts on Michigan farmers, researchers, rural communities and those who rely on food stamps. It will ensure that tart cherry growers have crop insurance and expands it to many other specialty crop growers that had to previously take low interest loans. The bill cuts about $1.7 billion a year from current spending levels.

More contaminant troubles for West Virginia (Environmental News Network): One month after the chemical spill in West Virginia that tainted the drinking water, another disaster occurred. 100,000 gallons of coal slurry, a waste fluid produced by washing coal with water and other chemicals, poured into the stream. Officials are trying hard to contain the spill so it does not affect the Kanawha River.

Kirtland’s warbler grant boosts effort to end endangerment (Great Lakes Echo): A federal grant of $170,000 is going toward planting two million jack pine seedlings in Northeast Michigan. This is the only habitat the Kirtland’s warbler can nest in. The effort to save the Kirtland’s warbler has been going on for 40 years. The habitat in Northeast Michigan contains 98% of the species’ population, spanning across the top of the Lower Peninsula and into the Upper Peninsula. There is even a possibility that the bird will be taken off the endangered species list.

PCB cleanup in Portage Creek near Kalamazoo River done, ahead of schedule and millions under budget (MLive): The U.S. Environmental Protection Agency has worked to remove all the polychlorinated biphenyls, or PCBs, from Portage Creek. The project ended earlier than anticipated and way under budget. Other areas of the Kalamazoo River Superfund will begin to be cleaned up with the extra time and money. The EPA removed almost 19,000 cubic yards of PCB-contaminated sediment.

Yosemite’s largest ice mass is melting fast (LA Times): Scientists believe Lyell Glacier in Yosemite National Park will be gone in 20 years. This glacier is a key source of water in the park and has shrunk 62% over the past 10 years. Lyell has also lost 120 vertical feet of ice. The big question is what will happen to ecological systems surrounding the shrinking and vanishing glaciers. Ken MacLeod, a professor of geological sciences at the University of Missouri, said the earth will eventually become ice-free if carbon dioxide levels continue to rise.

Extend California’s new earthquake early warning system, says scientist (Mother Nature Network): California will be the first state to get an earthquake early warning system, which is designed to detect the first strong pulse of an earthquake. This new system will cost about $80 million to build in California and run for five years. If the system was extended north to Oregon and Washington, it would cost an additional $120 million. These west coast states are in danger of magnitude-9.0 earthquakes from the Cascadia subduction zone.

Mercury will rise in Pacific fish, study finds (Mother Nature Network): Researchers from Michigan and Hawaii have studied how mercury ends up in species of North Pacific fish for years. They have discovered that mercury levels in these fish is likely to continue rising for decades. Researchers found that the mercury first traveled by air, and then entered the oceans when it rained. These findings could help efforts to curb mercury emissions.