In a story by the Great Lakes Echo, a Peregrine Falcon was found outside the Lansing Board of Water and Light’s electrical generation plant creating a nest. 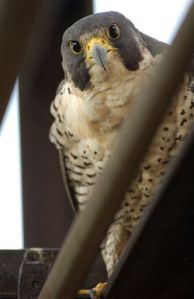 A young Peregrine Falcon peers over a ledge. Photo courtesy of the Michigan Department of Natural Resources.

Although the thought of a bird nesting and laying eggs doesn’t come as a surprise to many Michiganders this time of year, the Peregrine Falcon is a rare bird to the state, making the news more fascinating than usual and piquing the interest of environmentalists.

The Peregrine Falcon, about the size of a crow, boasts a wingspan of 44 inches at the maximum. The Peregrine is not usually found in wooded areas because of its need to hunt from the air in open spaces. The falcon mainly feeds on small birds — sometimes small ducks, giving it a misleading nickname of “duck hawk.” When the Peregrine hunts, it swoops down from high above to snatch its prey which is called stooping. During their stoops, the falcon can reach up to 180 miles per hour.

Peregrines mate for life and establish nesting areas called “eyries” which the falcons revisit annually.  The usual nesting sites for the falcons were in the cliffs of the Upper Peninsula prior to the decline. The recovery team released birds in the Upper Peninsula as well as urban areas including Detroit and Grand Rapids. The falcons would have the opportunity to feed on smaller birds in these areas and not be threatened by the Great Horned Owl. 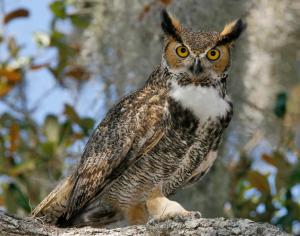 The Great Horned Owl, a predator to the Peregrine Falcon. Photo courtesy of larkwire.com

There Peregrine Falcon was considered a national endangered species until 1999, but is still classified as an endangered species in Michigan today. A major decline in falcons started in the 1950s, when harmful pesticides and chemicals were used, killing many birds by affecting eggshells during the incubation period. The chemicals made the falcons lay eggs with extremely fragile shells, which broke and cracked easily causing several fewer chicks to hatch. 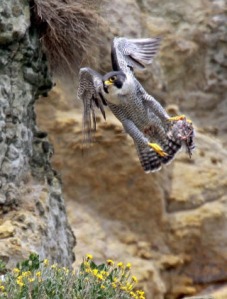 A Peregrine Falcon with its prey in its talons. Photo courtesy of lpfw.org

The Eastern Peregrine Recovery Team was formed in 1975, in order to help restore the lost bird in the Eastern U.S., five years after the harsh chemicals used were banned due to negative effects on the environment. At the time the team was formed, the falcons had shrunk to 10 percent of their original size. The recovery was found extremely successful as 400 falcons were released in the upper Midwest. Prior to the decline, there had been 109 pairs recorded nesting Peregrine Falcons in the state of Michigan.

For more information on the Peregrine Falcon visit the Michigan Department of Natural Resources website.

The Peregrine Falcon huddles over its eggs outside the BWL Eckert electric generating plant. Photo courtesy of the Great Lakes Echo.

Proposed drilling doesn’t sit well with Washtenaw County officials (MLive): Officials went on the record Wednesday night stating their opposition to any local oil drilling. In a 6-1 vote, the opposing vote from commissioner Dan Smith R-Northfield Township, they approved a resolution that would advocate against any future drilling in the area, similar to a resolution passed by Ann Arbor City Council.

Walmart: the corporate empire’s big step for sustainability (The Guardian): Rob Walton, the chairman of Walmart and now chairman of Conservation International’s executive committee, has had his hand in trying new ways to get Walmart to be a more sustainable business. The journey toward sustainability started a decade ago, and Walmart looks for ways to reduce waste such as reducing water consumption and packaging. Walmart officials have been negotiating with their suppliers on new methods of sustainability.

Rep. Don Young calls rules on oil drilling in wildlife refuges a ‘hare-brained idea’ (Huffington Post): The U.S. Fish and Wildlife Services opened the forum for comments earlier this year to learn how to update regulations on oil and gas development on areas which are protected under the National Wildlife Refuge System. Rep. Don Young (R-Alaska) has expressed his opposition to these new ideas for rules at a Natural Resources subcommittee hearing on Tuesday.

The big melt accelerates (The New York Times): As glaciers continue to melt, scientists have declared that some have shrunk to the point of no return — a risk that could set off a “chain reaction” bringing the remainder of the ice sheet to its demise. This research of the glaciers reaching the “point of no return” has signaled to many scientists that even if climate change came to an immediate halt, it may already be too late.

The difference between Muir Glacier at Glacier Bay National Park and Preserve in Alaska between 1941 (left) and 2004 (right). Photo courtesy of The New York Times.