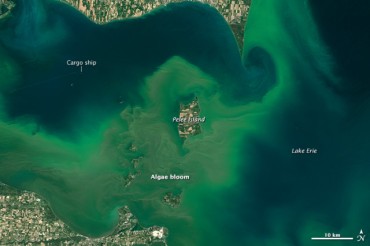 Michigan declares Lake Erie impaired (Great Lakes Echo): Michigan Gov. Rick Snyder designated that state’s portion of Lake Erie as impaired on November 10. Lake Erie has been threatened by toxic algae blooms for several years, threatening drinking water quality in Toledo and limiting recreational uses. Within the past year, the governors of Michigan and Ohio and the premier of Ontario signed a memorandum of understanding acknowledging the threat of toxic algae. They set a goal to reduce phosphorous loading up to 40 percent by 2025.

Toxins kill thousands of birds along Lake Michigan shore (Great Lakes Echo): Since 2006, dead birds have been washing up on Lake Michigan beaches. But this fall has been exceptionally grim, with up to five thousand birds being found dead along the shore. Researchers say the birds are dying because of a toxin called avian botulism, which can form on the lake bed under certain conditions. Botulism forms when there’s a lack of oxygen in the water. Even as botulism begins to form, it’s down near toxic valleys that many small fish continue to eat, consuming the poison as they feed. Local and migratory birds that land on Lake Michigan, tired and famished from their journey, consume small fish like the invasive Round Goby. Having eaten the infected fish, the birds become sick and die out on the lake due to paralyzing effects. 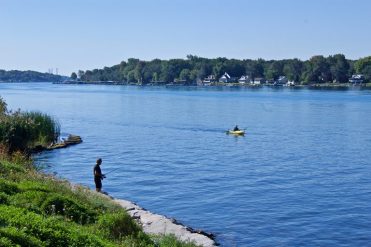 Restoration projects have made it possible for safe water recreational use in the Sarnia region of the St. Clair River. Image: Megan McDonnell

U.S., Canada battle St. Clair River’s polluted legacy (Great Lakes Echo): The St. Clair River that connects Lake Huron with Lake St. Clair has a long history of environmental problems. They are challen­­­­­­­­­­ges as diverse as E. coli bacteria that shut down beaches, industrial pollution by PCBs (polychlorinated biphenyls) and mercury contamination so severe that residents are advised to limit their consumption of locally caught fish. In recent years cleanup and sediment remediation projects have vastly improved the river and it is beginning to flourish once again. There have been more than 280 fish and aquatic wildlife habitat restoration projects on the St. Clair River, 12 of which were shoreline restoration projects.

Sea lamprey, Asian carp, zebra mussels and earthworms? (Great Lakes Echo): The wriggly soil-dwellers may not have the bad rep of some of their invasive counterparts, but they do have the power to change entire ecosystems. Now a recent study has found that an abundance of earthworms causes a decrease in the small plant matter scattered on the forest floor. By eating away at what scientists call “fine root biomass” worms can significantly change the forest. Worms start a bottom-up chain reaction that can bring about fundamental environmental changes. They affect what plants are able to root and grow in the soil. The kinds of plants that grow affect which species of animals can live in a forest.