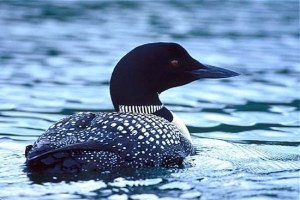 Great Lakes loons dying in record numbers from botulism outbreak spurred by ecological disturbance (AnnArbor.com): Common Loons, Great Lakes birds roughly the size of small geese, are disappearing at an alarming rate as a result of a surprising source: Botulism E., arguably the most poisonous substance known to man. According to the Great Lakes Science Center, the toxin is transferred from rotting algae to algae-eating Gobies, eventually infecting Goby-eating birds such as Loons. The consequences are significant, as scientists estimate that 3,000 Lake Michigan Loons were killed from botulism in 2012 alone.

Photosharing websites aid study of insect biodiversity (Conservation Magazine): Technology has enabled everyday people help identify insect species across the globe. Scientists are examining the thousands of snapshots on various photosharing websites to learn more about special distribution and conservation statuses among insects. For example, a photo of an American species of assassin bug which was taken in Europe, revealing that the species has spread out of the continent. These photos can reveal where a particular species may be currently located or whether that species still exists, creating what naturalists consider a “democratic revolution in the study of biodiversity.”

Should Canada Geese be killed off instead of mute swans? DNR, readers weigh in (mlive): Opinions are buzzing around Barry County’s approved plans to eradicate its mute swan population. According to wildlife officials, the swans are an invasive species which can harm ecosystems by depriving native wildlife of food. However, many individuals voiced concerns in response to this movement, believing that Canada Geese are actually more problematic than mute swans. Still, DNR officials point out that, while the geese are a pervasive presence across the state, mute swans are still more ecologically harmful.

“I Will Act On Climate” 27-state bus tour arriving in Michigan Monday (CBS Detroit): Former Michigan Governor Jennifer Granholm will join a group of community members Monday morning to host the “I Will Act on Climate” bus tour at its Muskegon stop. The bus tour is a step toward creating a national energy policy, traveling from state to state and rallying communities to act on climate change. The movement comes as a result of President Obama’s first-ever carbon limit announcement roughly two months ago. In addition to Muskegon, the bus will stop at Peoples Community Services in Detroit Monday afternoon.

Wild rice mounts a comeback for culture and ecology (Great Lakes Echo): Native Americans and ecologists across the state are working to restore native wild rice, a crop that had nearly disappeared from Michigan’s waters. Though the plant was once common in streams and rivers across the state, invasive species, raised water levels and property owners clearing waterways have limited sizable beds of the tall grass to less than one dozen. The Native Wild Rice Coalition, a group working to restore wild rice for its ecological and cultural significance, has implemented plans to educate individuals about the plant in hopes of eventually changing state regulations.

Predatory ‘frankenfish’ caught in Virginia nets world record (Mother Nature Network): A Virginia fisherman has caught the world’s largest northern snakehead at 17 pounds 4 ounces, confirmed by the International Game Fish Association. The northern snakehead is an invasive, carnivorous predator with razor sharp teeth. Adding to its Frankenstein-like qualities, the creature can breathe air and survive out of water for up to four days. Northern snakeheads were first spotted in a Maryland pond after their release from a fish market, and the species has since spread into rivers across the nation.

We share Michigan with 13 frog and toad species, which play a beneficial role to both humans and wetland ecosystems. With their charming choruses and appetite for virtually any pest that crosses their path, frogs and toads can be a major benefit to yards and gardens. It is even estimated that one cricket frog devours 4,800 insects in one year.

Like many of Michigan’s amphibians, frogs are small and camouflage easily among grasses, trees and soil. But with the right tricks, you can encourage these sometimes small and cold-blooded critters to come out of hiding and take haven in your backyard.

• Take advantage of natural resources
A well-groomed yard may be aesthetically pleasing, but it isn’t supportive to wildlife. Frogs and toads are attracted to native ground cover, like tall grass and wildflowers. To welcome amphibians, leave leaf litter, logs and rock piles under trees and shrubs that provide natural shelter.

• Build a toad house
Provide a safe place for toads to take shelter by building a toad burrow or toad house. Create a depression in soil beneath shrubs or flowers. Layer stones along the side and top of the depression, about 6-8 inches high. Or, reuse an 8-inch flower pot by creating a hole big enough for a toad to fit and placing it upturned in a shady area in your garden.

• Build your own backyard pond
Add diversity to your yard by creating a pond, which is an easy ways to attract frogs, toads and other forms of wildlife. Recreate their natural habitat with vegetation like

water lilies, cattails, fallen logs, ferns, wildflowers and tall grasses, which attract insects and other food for frogs as well as provide cover. Native plants and rocky areas outside of the pond serve as retreat areas for toads.

When seeking the ideal spot for your pond, choose an area on low ground and away from potential threats such as raccoons or runoff from fertilizer and pesticide use.

Ponds are best supported by clay soils and should not be built in dry, sandy soil. Ponds should be at least 12 feet long and 6 feet wide, with space for amphibians to bask along the edges of the water. Make sure the water is slow moving and shallow, about 1.5 feet deep, so that it is ideal for pond-breeding amphibians to lay their eggs.

Almost all of MNA’s 170 sanctuaries support amphibians. Visit wetland and forest type habitats for a glimpse of one of 13 species of frogs and toads. For more information about MNA and sanctuaries, visit our website.

Like Rodney Dangerfield, the lowly earthworm gets no respect. Yet, this seemingly unimportant lumbricid is an indicator of soil health, and can dramatically impact soil structure, water movement, nutrient dynamics and plant

growth. There are 21 different species of earthworms in Michigan, and 50-300 worms can be found in a square yard of cropland nutrient-rich soil.

Earthworms are made up of many small segments, each segment with many small hairs that assist the worm in movement, aided by a slimy mucus that it produces. Without a skeletal system, the worm is heavily muscled. The blood circulating through its system gives it a reddish color. Earthworms can live up to eight years, but most do not survive more than a year.

Moist soils are necessary for earthworms to thrive, and the majority of worms are found in the top meter of soil, most often just below the surface where there is plenty of decomposing plant material. Earthworms consume dead and decaying plant material and are prey to robins, red-winged blackbirds, crows and other ground-feeding birds as well as foxes, shrews, skunks, moles and garter snakes. During droughts or winter freeze, earthworms may go deeper than the top meter of soil. Worm tunnels have been found at depths of 16 feet.

Earthworms promote a healthy environment in the following ways:

• Worms eat microorganisms and produce organic matter in their feces or casts that becomes plant food.

• Casts help move large amounts of soil to the surface and carry organic matter to the lower strata.

• Earthworms help with soil drainage, acting as a conduit for rain, especially after a heavy downpour. These burrows minimize soil erosion and increase porosity and drainage.

• Channels made by earthworms are rich in nutrients and provide space for root growth. This makes it easier for plants to set a deep root base.

• As earthworms eat the plant and crop residue, the castings they leave behind provide nutrients to the upper soil levels and the surface residue is pulled into their burrows.

Earthworms are more than good fish bait; they play an integral part in keeping soil rich with nutrients and maintaining a healthy environment for farms, fields and forests. So the next time you see a worm crawling on the sidewalk after a heavy rain, give it some respect.