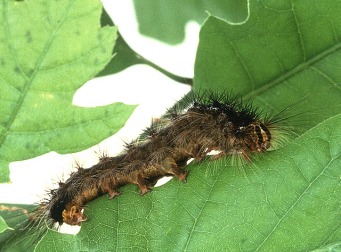 Gypsy moth caterpillars attacking trees in southeast Michigan (MSU Extension): Effects of last year’s drought are still prevalent, as gypsy moth populations are rapidly increasing in southeast Michigan. The lack of rainfall in 2012 allowed more caterpillars to survive into the moth stage, resulting in mass defoliation in southeast woodlands. In defense, local property owners are wrapping Tanglefoot bands around tree trunks to prevent caterpillars from climbing. Additionally, recent rainy periods have allowed for the creation of Entomophaga maimaiga, a fungus that naturally limits the species.

Bald eagles produce first eaglet in Stony Creek Metropark history (Daily Tribune): Though only 6 weeks old, a Stony Creek eaglet is making headlines. According to area birdwatchers, the baby eagle is the first of its kind born in the park since Stony Creek’s founding in 1964, as high levels of human activity have continually limited eagle reproduction in the area. Birdwatchers say the birth is a positive sign, revealing that Stony Creek’s efforts to protect bald eagles, such as improved water quality and better habitat management, are paying off.

Mayfly population is steady, indicating good water quality (The News-Messenger): After decades of little mayfly presence on Lake Erie, the species is back and its populations are remaining steady. Though Lake Erie has dealt with algae blooms and invasive species in recent years, these factors do not appear to be affecting the pollution-intolerant mayfly population at this point. Because mayflies are a vital source of protein, the lake’s ecosystem is showing positive changes as a result of the consistent mayfly population.

Fish Nets Found to Kill Large Numbers of Birds (The New York Times): A recent study in the journal Biological Conservation reveals that fishing nets have a much larger impact on bird species than was previously believed. According to the study, vessels that use gill nets snare and drown at least 400,000 seabirds each year, including penguins, ducks and some critically endangered species, such as the waved albatross. Because there are few proven ways to deter seabirds from nets, it is difficult to reduce this number of deaths. Still, many fishing enterprises are researching ways to solve the issue.

Arapaçu-de-bico-torto, loosely translating to crooked-beaked woodcreeper, is one of the birds recently discovered in the Amazon. Photo courtesy of Wikimedia Commons.

Bird extravaganza: scientists discover 15 new species of birds in the Amazon (Mongabay): Scientists working in the southern Amazon have recorded 15 new bird species since the start of 2013, making this group the largest number of uncovered Brazilian Amazon birds in 140 years. Though 11 of the new species are known only in Brazil’s forests, four others are found in areas of Bolivia and Peru as well. This especially large discovery is unusual because, on average, only seven new bird species are discovered worldwide each year.

BP Ends Gulf Cleanup in 3 States (The Huffington Post): Roughly three years after BP’s massive oil spill in the Gulf of Mexico, the company officially ended cleanup work in Mississippi, Alabama and Florida last Monday. BP spent approximately $14 million attempting to return the shoreline as close to pre-spill conditions as possible, with more than 48,000 individuals involved in those efforts. However, work continues along 84 miles of Louisiana’s shoreline, which still shows damage from the spill.