Turtle River in eastern North Dakota, a remnant of glaciers once covering the area and Lake Agassiz. Photo by Eric Freedman courtesy of the Great Lakes Echo.

Every week, MNA gathers news related to the environment from around the state and country. Here are a few highlights from what happened this week in environmental news:

Quick, name the greatest of Great Lakes (Great Lakes Echo): Unbeknownst to many Americans, the greatest of lakes that once existed was in North Dakota, Minnesota and Canada. This lake, known as Lake Agassiz, existed 13,000 years ago and was larger than the five current Great Lakes put together. 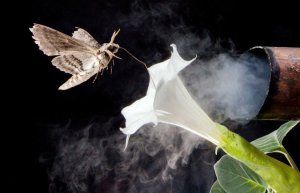 Photo by Kiley Riffell courtesy of the New York TImes.

City smells confound flower-seeking moths (New York Times):  A new study finds that tobacco hornworm moths which depend on nectar for energy have been adversely affected by fuel exhaust. The exhaust along with other air-pollutants have inhibited the moth from being able to smell flowers, making it difficult to find the nectar they need to survive.

Meet Kendall Jones the Texan cheerleader whose exotic animal hunts outraged the internet (Huffington Post): There has been a large outcry from many activists concerning photos posted by Kendall Jones on Facebook with dead or tranquilized endangered animals. Jones claims her activities are in benefit of these endangered animals, for example posing next to an unconscious rhinoceros in order to place a microchip in it for veterinary tracking purposes.

The Peregrine Falcon huddles over its eggs outside the BWL Eckert electric generating plant. Photo courtesy of the Great Lakes Echo.

Proposed drilling doesn’t sit well with Washtenaw County officials (MLive): Officials went on the record Wednesday night stating their opposition to any local oil drilling. In a 6-1 vote, the opposing vote from commissioner Dan Smith R-Northfield Township, they approved a resolution that would advocate against any future drilling in the area, similar to a resolution passed by Ann Arbor City Council.

Walmart: the corporate empire’s big step for sustainability (The Guardian): Rob Walton, the chairman of Walmart and now chairman of Conservation International’s executive committee, has had his hand in trying new ways to get Walmart to be a more sustainable business. The journey toward sustainability started a decade ago, and Walmart looks for ways to reduce waste such as reducing water consumption and packaging. Walmart officials have been negotiating with their suppliers on new methods of sustainability.

Rep. Don Young calls rules on oil drilling in wildlife refuges a ‘hare-brained idea’ (Huffington Post): The U.S. Fish and Wildlife Services opened the forum for comments earlier this year to learn how to update regulations on oil and gas development on areas which are protected under the National Wildlife Refuge System. Rep. Don Young (R-Alaska) has expressed his opposition to these new ideas for rules at a Natural Resources subcommittee hearing on Tuesday.

The big melt accelerates (The New York Times): As glaciers continue to melt, scientists have declared that some have shrunk to the point of no return — a risk that could set off a “chain reaction” bringing the remainder of the ice sheet to its demise. This research of the glaciers reaching the “point of no return” has signaled to many scientists that even if climate change came to an immediate halt, it may already be too late.

The difference between Muir Glacier at Glacier Bay National Park and Preserve in Alaska between 1941 (left) and 2004 (right). Photo courtesy of The New York Times.

Person A: “What city are you from?”

Person B: [holds up hand and points to location of town.]

Has anyone from Michigan not used their hand to pinpoint their hometown? This is so normal for any Michigander to do. Using hands as maps is a part of Michigan culture.

How exactly are we so lucky to have our state shaped like a mitten? If you were thinking glaciers, you’re absolutely right.

MNA trustee and geologist Mary Ann Czechowski shed some light on Michigan’s glacial history in a recent interview. Mary Ann is a geology consultant and the author of Gold in Michigan.

A glacier is essentially a large river of ice that flows through a landscape.

Today, glaciers can be found on every continent except Australia.

There have been four Ice Ages in the Earth’s history.  In the last Ice Age, the Pleistocene Epoch began and lasted from approximately two million years to 12,000 years ago. During this time, warm and cool temperatures alternated and glaciers retreated and advanced in interglacial periods. Around the world, glaciers carved and influenced much of today’s landscape, including the Great Lakes and the state of Michigan.

Like bodies of water, the first glaciers flowed south from what is now Canada seeking the areas of least resistance. It is believed that the Great Lakes were once ancient riverbeds, providing the glaciers perfect pathways south.

With each advance and retreat of the glaciers, the shape and water level of the lakes changed. These changes weren’t happening in a matter of months, but over thousands of years.

As the shape and water level of the lakes changed, the beaches did as well. When water from the glaciers retreated, it left behind a beach. The Manistique Dune and Swale Nature Sanctuary, recently visited on MNA’s fall adventure, has excellent evidence of these prehistoric beaches. In the sanctuary, a swell of sand will appear out of place among the trees but as you continue to walk towards the current water’s edge, you will walk through various sand swells among trees representing past water levels of Lake Michigan.

Evidence of glacial beaches can also be found at Frink’s Pond and Carl E. McAlvay Memorial Plant Preserves. See the MNA’s sanctuary page for more information on these sanctuaries and others throughout the state.

Many of Michigan’s inland lakes, including Walled Lake and Higgins Lake, were also formed by glaciers. These lakes are called kettle lakes, and were created when chunks of ice would break off the glacier and become embedded in the ground. When the ice chunk would melt, a kettle hole would be left and be filled by water from natural sources.

As the glaciers carved the landscape, they left deposits of sediment. Small pieces of rock originally from Canada have been found as far south as in Indiana and Ohio. Here in Michigan the Goose Creek Grasslands Prairie Nature Sanctuary rests in a glacial trough where raw gravel was left by retreating glaciers. Timberland Swamp Sanctuary is a basin that was formed by debris left by the glacier.

Michigan sits atop bedrock composed of many rock types, including sandstone. As the glaciers eroded the landscape of Michigan, sand became much more prevalent, giving us our sandy beaches, sand dunes and wetlands. The sand blocks the drain of water from land into the lakes, and trapped water creates wetlands, such as the Saginaw Wetland Nature Sanctuary in Huron County.

The sand eroded by the glaciers has also shaped Michigan’s shorelines today. Michigan receives mainly westerly winds, causing the Lake Michigan coastline to have significant dunes not only along the shoreline, but also further inland than usual.

Lake Huron on the other hand, has fewer dunes due to the fact that the westerly winds blow the sand back into the lake, making for a sandy bottom. Redwyn’s Dunes Nature Sanctuary on the shore of Lake Superior has the only sand dunes on the Keweenaw Peninsula, which were blown in after the glacial retreat

For more information volunteering or visiting sanctuaries, please visit the MNA website . Special thanks to our members for their support and help throughout Michigan.