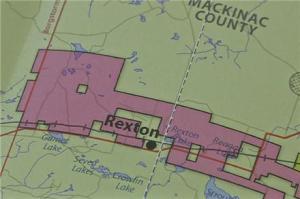 Limestone producer looks to build massive underground mine in the U.P. (Up North Live): The Canadian company, Graymont Inc., is one of the largest limestone producers in North America. The company wants to start mining in the Upper Peninsula by buying 10,000 acres of Mackinac County land that currently is owned by the Department of Natural Resources. The land will be divided up between an underground mine, surface mining and a processing plant. County residents have mixed reactions to the plan, claiming it will bring jobs, but also harm the environment. The DNR is accepting feedback for the next six weeks on the situation.

Climate change opens doors to forest pests new to Great Lakes (Great Lakes Echo): The changing climate will increase the frequency of droughts, increase the severity of snow/rain storms and make frosts occur later. These things will make trees more vulnerable to insects and disease. Insects such as the mimosa webworm and the hemlock woolly adelgid are a concern for the Great Lakes region. The mountain pine beetle, however, is the most dangerous because it could mean a higher risk of forest fires if the insect causes an increase in pine tree mortality.

Snuffing out smoke: West Michigan school bus drivers shut off engines to reduce emissions (MLive): Schools in West Michigan are taking steps toward reducing the amount of fumes that come out of their school buses by turning off the buses rather than letting them idle. Newer buses also have higher standards when it comes to harmful emissions. A recent USA Today story reported that soot levels in air samples at Cincinnati public elementary schools dropped after the schools implemented the change.

What America’s forests looked like before Europeans arrived (Mother Nature Network): Researchers know the landscape of America’s Northeastern forests are dramatically different today than they were 400 years ago, before European settlers arrived. Because of a rare fossil discovery in Pennsylvania, scientists were able to piece together the full story of America’s early forests. They are hoping that if they can identify fossil tree-leaf sites, it can help with forest restoration projects throughout the Northeastern United States.

Michigan’s feral swine numbers are dropping…or are they? (Great Lakes Echo): Wild pigs in Michigan are known to carry diseases, infect farm pigs and destroy land. According to the Department of Natural Resources, the number of feral swine in Michigan has dropped significantly. But, other groups are saying differently. The DNR’s report shows that less than ten feral swine were reported this year, whereas over 40 were reported last year. Mary Kelpinski, executive director of Michigan Pork Producers Association, said the problem is actually growing worse and they are having a hard time getting people to report sightings.