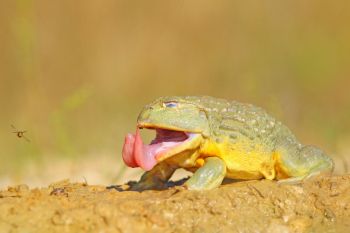 Supernatural spit is the frog’s secret weapon for catching bugs (Mother Nature Network): Frogs are famous for the long sticky tongue they use to snag prey. But what is it about this tongue that allows a frog to nab an insect, pull the insect back to its mouth with lightening speed, and eat it — yet the stickiness doesn’t glue the frog’s mouth shut? The secret is super sticky saliva that’s reversible. A new study demonstrates that the saliva can turn from a honey-like viscosity to one more like water and back again, and all within a few seconds. Super-special spit and a trippy tongue make capturing insects a snap.

National Park Service starts keeping track of park disturbances (Great Lakes Echo): For the first time, the National Park Service is collecting concrete data to monitor and find patterns in what affects national park landscapes. The data on how park landscapes are affected by various disturbances both inside and outside the parks will help park managers maintain them for the ecosystem and for the visitors. Fire and beavers, for example, play key roles in developing habitat by changing the structure or composition of the landscape. Similarly, some human-induced disturbances are better for the environment than others. Sustainable forest harvest can aid the regeneration of a forest, while land development for things like new parking lots do not. Cataloging the disturbances will help with assessing if the impact is beneficial or recoverable. 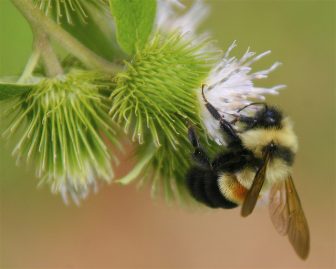 The U.S. Fish and Wildlife Service designated the rusty-patched bumblebee as endangered in early January, a first for any bee species. Image: Dan Mullen.

Fight invasives or protect pollinators: Neonicotinoids present tough choice (Great Lakes Echo): Neonicotinoids, a class of insecticides frequently used in agriculture, gets plenty of bad press for killing pollinators like honeybees. But they’ve also emerged as an important combatant of the emerald ash borer, an invasive insect that has devastated ash populations all over the United States with the highest risk localized to the American Midwest and the northern half of the Eastern seaboard. For pollinator protectors in Michigan, that’s a problem. With the recent designation of the rusty patched bumble bee as endangered by the U.S. Fish and Wildlife Service – the first time any bee species in the U.S. has landed on such a list – the race for effective conservation tactics has accelerated. The Michigan Pollinator Protection Plan Committee will have a draft of the plan available for public comment between March 10 and April 14.