Invasive Species and Site Preparation Workshop (Michigan Society of American Foresters): Attend a free hands-on invasive species workshop in Wellston, Michigan on Saturday, May 21 hosted by the Michigan Society of American Foresters. During this workshop you will learn all about the ecological and economic effects of invasive species, how and why they spread, control options, pesticide laws, and site preparation methods for planting tree seedlings and how this is relevant to invasive species management.  There will be a large hands-on component where you will observe and use different types of equipment, such as personal protective equipment (PPE), the gas-powered forestry clearing saw for killing invasive shrubs and small trees, and herbicide equipment for mixing and applying chemical.

Wildlife grants awarded to tribes in Michigan, Wisconsin and Minnesota (Great Lakes Echo): Native American tribes will protect bats from logging and place sturgeon in school aquariums as part of a recent round of federal grants. The Tribal Wildlife grant program was established by the U.S. Fish and Wildlife Service in 2003. This year, $5 million was awarded to 29 tribes, three from Great Lakes states. In Michigan, the Saginaw Chippewa tribe is receiving $199,431 to determine what plants and wildlife live in the area and how to protect important species. 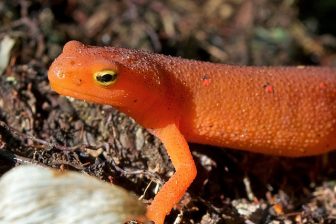 Eastern red spotted newts like this one are at risk of fungal disease. Photo: Distant Hill Gardens, Flickr

A deadly fungus threatens salamanders (Great Lakes Echo): A deadly fungus is likely to threaten the health of salamanders in the United States. And one type of salamander found in the Great Lakes region – the eastern newt – is especially at risk. Batrachochytrium salamandrivorans – Bsal for short – is a fungus that eats away the skin of certain salamanders. It’s found in parts of Asia and Europe, and researchers say it could strike the United States next. Eastern newts in the region have an increased risk because Chicago is a port where diseased salamanders could be brought in. 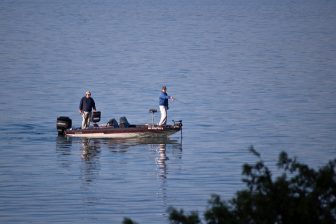 Inland fisheries are important indicators of changes in ecosystems from things such as hydropower projects and deforestation. Photo: Ken Bosma

Inland fisheries’ importance underrated, study says (Great Lakes Echo): Inland fisheries and aquaculture account for more than 40 percent of the world’s reported fish production but their harvest is frequently under-reported and ignored in the Great Lakes region and elsewhere, a new study says. The central role of inland fish in aquatic ecosystems makes them good indicators of ecosystem change. Ecosystem change includes threats from agriculture, hydropower projects and deforestation, as well as overfishing and invasive species. Although the study focused primarily on inland fisheries in the developing world, it also addressed the situation in the Great Lakes and the region’s inland waters. The study cited massive die-offs of alewives in Lake Michigan in the 1960s, an occurrence that brought to public and political attention large ecological changes occurring in the Great Lakes.