With ever-fluctuating weather conditions, and uncertainty in how climate change will affect water levels in the Great Lakes basin, the work that MNA is doing to protect habitat for rare, threatened, and endangered species is now more important than ever. 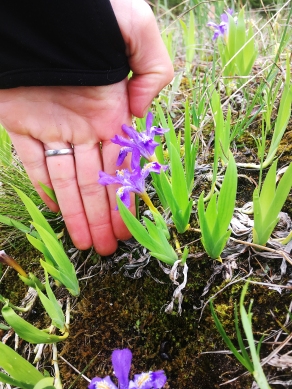 Volunteer Ashley Schilling uses her hand as a measurement for the dwarf lake iris.

One of several coastal sanctuaries that MNA currently maintains is the Spitler Shore Nature Sanctuary in Presque Isle County. This 50-acre sanctuary includes more than 1,500 feet of Lake Huron shoreline, and contains populations of the federally threatened dwarf lake iris. This sanctuary’s habitat, like much of the Great Lakes shoreline, is at risk from extreme and unpredictable fluctuations in water levels, affecting much more than just its magnificent sunrise views.

During the period between 1998 and 2012, Lakes Michigan and Huron experienced persistently low average water levels. This was due in large part to increased evaporation – to which the lakes are susceptible whenever they are not covered by ice. But the winter of 2013-14 brought extended periods of extreme cold, resulting in increased ice cover and protecting the lakes from the much of this evaporation. Since that time, all of the Great Lakes have risen to record-high average levels, the product of both limited evaporation, and heavy precipitation and runoff from the many rivers and streams that feed the lakes. Water levels in 2019 have proven to continue this trend of new record highs, with meteorologists having estimated a 10-inch rise on Lakes Michigan and Huron through July (representing 8 trillion gallons of water) – the lakes were recorded at 13 inches above their 2018 levels, by the end of June. 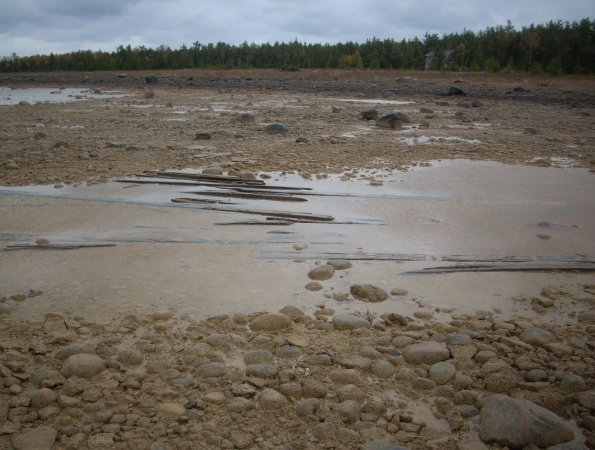 Many shipwrecks and their associated debris were newly uncovered during this reduction and influx of water along the shorelines of Huron and Michigan. The photo here shows some of these shipwreck timbers which today rest peacefully once again underwater, discovered by a father and daughter from Camp Chickagami. Photo by John Porter.

These extremes have had profound effects on developed shoreline statewide, with much of Belle Isle being inundated with rising St. Clair River water, and roads in the Upper Peninsula at risk of eroding into Lake Superior. The impact on non-developed shoreline, like that found in Spitler Shore Nature Sanctuary, is yet to be realized, but it is now more clear than ever that these spaces need protecting, so that they can continue to support the diversity of plant and animal life required for a healthy ecosystem.

You can learn more about MNA’s statewide nature sanctuaries online at michigannature.org.