MNA works every day to protect the most vulnerable plant and animal species in the state. Two recent projects of particular interest are the turtle surveys being conducted at MNA sanctuaries in the southern Lower Peninsula.

The Blanding’s turtle is a Michigan species of special concern, due to the risk of habitat fragmentation. Because the Blanding turtles utilize a range of terrestrial and aquatic habitats, they are especially impacted by the use of pesticides and the construction of roadways near wetlands, which causes fragmentation of the landscape at wetland complexes. 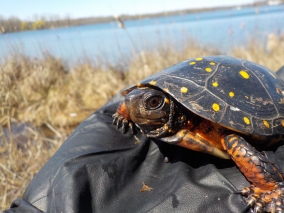 Spotted turtles are a Michigan threatened species, which have historically been found in the southern and western areas of the Lower Peninsula. These turtles prefer shallow wetland habitats, such as marshes and fens, and require clean water for their survival.

Both the Blanding and Spotted turtles are currently being reviewed by the U.S. Fish and Wildlife Service for potential listing under the U.S. Endangered Species Act; and both are considered vulnerable to climate change according to the Michigan Natural Features Inventory. MNA Volunteers and Stewards have recently conducted preliminary surveys to better understand these species’ usage at several MNA sanctuaries. The initial Blanding’s turtle survey will determine where larger populations may exist within the MNA sanctuary system.

Steward Dan Burton holds a spotted turtle during a survey in May, 2019. Photo by Rebecca Kenny.

It is important to continue gathering data on the habitats, plants, and animals that MNA works to protect, as monitoring helps to determine what methods and management techniques are working. MNA looks forward to these turtle surveys, and continuing to provide crucial habitat for these species in the southern Lower Peninsula.