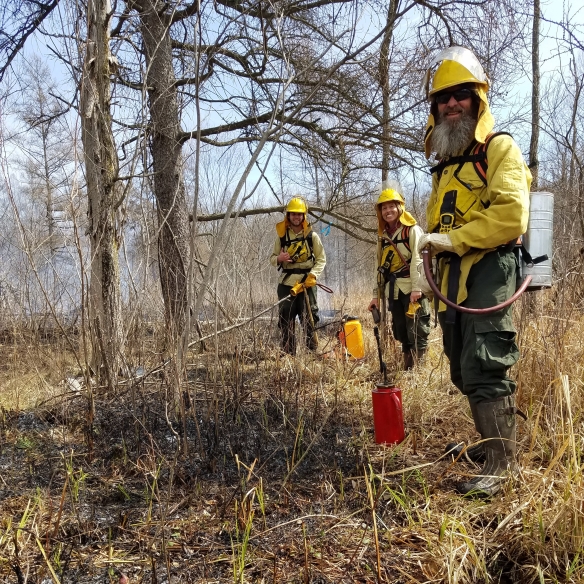 April is traditionally the peak of burn season in the land stewardship world. You’ve probably noticed more controlled/prescribed burn photos filling up your social media feed; people dressed in yellow, flames and smoke over charred ground. But for as much of the media coverage as these burns get, you don’t often see the stories behind the need for them.

Controlled burns can take place for a number of reasons – to treat and manage invasive species like autumn olive, or in some prairie environments, to prevent trees and shrubs from encroaching and crowding out essential sun-loving wildflowers and prairie plants. Over the past month, MNA stewards conducted prescribed burns at several of its sanctuaries, including Butternut Creek Sanctuary in Berrien County, the goal of which was to maintain the open grassland features of the prairie fen. Prairie fens are critical habitat for a high number of imperiled and declining species including the federally endangered Mitchell’s Satyr, one of the rarest butterflies in the world; known only to exist in Midwestern fens that were created by the retreating glaciers. While the Mitchell’s Satyr has not been observed at this particular sanctuary for a number of years, maintaining healthy prairie fen communities like that found at Butternut Creek is essential to improving threatened, fen-dependent species across the state.

Historically, fire crept through the understory of the forest, but did not necessarily ignite the mid- or upper-levels of the canopy as observed in the intense wildfires of recent times. Prior to human settlement, fire prevented shade-tolerant trees from populating oak-hickory forests, oak barrens and open communities. Without fire, trees like red maple, American beech, basswood and elm survive in the understory and fill gaps in the forest canopy.

As gaps are filled, less sunlight reaches the forest floor, making it impossible for shade-intolerant species like oak and hickory to grow. Herbaceous prairie and savanna species also become shaded out as trees become established. Slowly, the entire species composition of natural communities changes, and many species of plants and animals must find food and habitat elsewhere.

Prescribed fires have had significant and measurable results, such as restoring and protecting the habitat of the federally-endangered Karner blue butterfly. Without active management to keep these critical habitats healthy, these species and other habitat specialists like them would be at greater risk of decline.