One problem with identifying invasive species is that, many times, they appear almost as beautiful as the native species they live among. Garlic mustard (Alliaria petiolata) has been an established invasive in North America for many years, yet without knowing the story behind this species it appears to be just another of Michigan’s many gorgeous flowering plants. This same story follows for another species in the Brassicaceae family which has been spreading throughout Michigan without the same spotlight as garlic mustard. 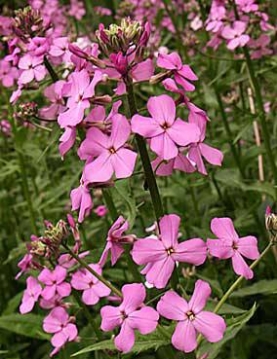 With delicate violet flowers atop a slender green stalk, nothing about this flowering plant seems out of the ordinary for a wildflower native to Michigan; this assumption, however, is sadly misinformed. Dame’s rocket is one of the many common names for Hesperis matronalis, a close relative to the widely known invasive garlic mustard. This relation can be determined visually through examination of the petals and the similarity in shape between the leaves of the two species. An additional similarity Dame’s rocket has to garlic mustard is its two year life cycle –  the first year plant exists as a rosette low to the ground and without flowers, while the second year plant is the more recognizable image shown to the left. An important distinction to make when identifying Dame’s rocket is that it has four petals per flower head. Native phlox species appear similar in structure and flower color yet have five petals per flower head.

A plant being nonnative is not enough reason to label it as necessary to remove. For a plant or animal to be labeled as invasive it must present some danger to the health of native species or ecosystems. The abundant seed production and allelopathic nature of Dame’s rocket are a few of the characteristics which qualify it as an invasive species. Similar to other members of the mustard family, a single second year plant can produce dozens of seed pods, each containing many more individual seeds. When released from the confinement of a garden, these seedlings have the potential to overwhelm native plants, thereby altering the composition of native environments. Another characteristic of Dame’s rocket that threatens native species is that it is allelopathic, meaning it has the ability to produce chemicals which stunt the growth of surrounding plants, potentially killing them. With the potential for overwhelming native populations (especially when it is found growing alongside garlic mustard) it is extremely important that Dame’s rocket is reduced in popularity as a yard plant and any that has escaped into surrounding areas is carefully removed.

The process of removing Dame’s rocket can be difficult, as it has a characteristic taproot that extends deep into the soil and makes it hard to pull by hand. One method for effectively removing small stands of this plant is to wait until a light rain has moistened the soil so that careful hand pulling can remove the entirety of the plant and its taproot. The plants should then be placed in a garbage bag that is tightly tied in order to prevent any sort of re-sprouting or further spread. For stands too large for removal of the complete plant, another method of control is to pull the seed pods off the plants and seal those in a plastic bag. This method of invasive species control has been utilized by MNA volunteers and interns at the Dowagiac Woods Nature Sanctuary in southwest Michigan. Removal of garlic mustard seed pods has reduced the spread of invasive plants and protected the variety of wildflowers, lichen, and trees which reside in the area.

Though each part of nature holds value and beauty, when an organism is brought outside of its natural habitat into a new environment it has the potential to disrupt the equilibrium of those already there. For this reason it is important that invasive species such as Dame’s rocket are discussed and prevented from spreading through stewardship work by organizations like the Michigan Nature Association, as well as sharing knowledge about this and other invasive species to allow the beauty of native ecosystems of Michigan to be conserved.