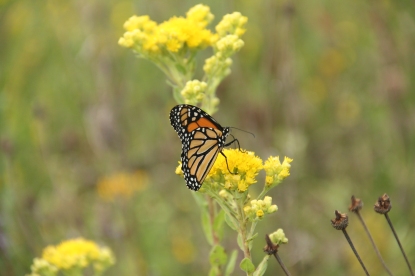 As Michigan’s only true terrestrial turtle, the Eastern box turtle might often be mistaken for a small tortoise. It is one of four box turtle species native to the United States. Though an uncommon find, it ranges throughout Michigan’s lower peninsula. It spends its life in small patches of open woodlands, sometimes bordering open fields or wetland. Throughout its life, the Eastern box turtle remains small- to mid-size, growing between 4-8 inches in length. It can be extremely long-lived – occasionally over a century. 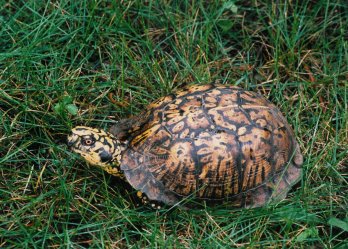 allows them to retract their head, tail, legs and arms for full protection. Males and females can be most readily distinguished by the color of their eyes. While males often have red eyes, females have yellow to match the vivid markings on their dark carapaces and bodies. They reach sexual maturity at about 10 years of age. Mature females lay between 3-8 eggs per clutch, and breed at most once per year. During winter, they burrow into mud or bury themselves beneath leaf litter for warmth and camouflage.

Like most turtle species, the Eastern box is an opportunistic omnivore. This means it will eat just about anything food-like that it comes across, including insects, worms, grasses, fruit, mushrooms, flowers, and even carrion and garbage.

Because this species is long-lived and slow to breed, populations can be difficult to exact. However, the species has gained status as Special Concern in the state of Michigan. Habitat loss and fragmentation are primary concerns to populations, as urban and agricultural development extend further into their range and roads cut through much of what is left. If you come across a turtle you suspect to be an Eastern box turtle, admire it from a comfortable distance. If the turtle is found on or near a road, escort it back to safety first!

Fall means back to school, and that new reality brings a seasonal change to the daily migration routes for many Michigan families.

Fall is an especially great time of year to connect kids to nature and the incredible changes that unfold. As students – and their parents – adjust their new clocks and adapt to a new school year, here at MNA we are working with teachers to enrich their student’s classroom learning by using MNA nature sanctuaries as living laboratories. Our schools-to-sanctuaries initiative is creating exciting new partnerships across the state, like the one described by Addison High School teacher Aaron Wesche in this issue’s Q&A (p.33).

Cooler temperatures and decreasing daylight are signals for migratory birds and insects that it is time to leave their northern breeding grounds for warmer winter climes. Some make extraordinary difficult journeys to do so. One of the most astonishing dramas in nature is the annual Monarch butterfly migration from the northern U.S. to a tiny strip of forest in Mexico. Take yourself to a Great Lakes beach or an MNA nature sanctuary with open fields this time of year and wait and watch. You’ll very likely see one of these stunning and fragile beauties flit by as they make their miraculous journey to Mexico.

Sadly, those who have spent a lifetime watching the Monarch migration for the sheer joy of it will tell you they don’t see as many butterflies anymore. Scientists who study the Monarch have confirmed this. In this issue, noted Michigan author Bill Rapai tells the story of how the Monarch migration is now in serious danger of disappearing (p. 18).

The good news is that we can play a role in helping this extraordinary migration (while also helping other declining pollinators). We know that many of our nature sanctuaries provide necessary places for fuel and rest for Monarchs on their journey, but we also know much more needs to be done.

With your continued support MNA will be working to create more Monarch-friendly habitat within our statewide network of sanctuaries; help inspire the next generation to care about Michigan’s natural wonders like the Monarch butterfly through our education programs; and coordinate our work on Monarch conservation with the work of like-minded groups in Michigan, across the Midwest, and Mexico.