Using its internal compass and the moon, stars, and sun, the rufa red knot makes one of the longest migrations on Earth, nearly a 20,000 mile round-trip flight from the southernmost tip of South America to its Arctic nesting grounds. Along the way, the red knot may face multiple risks—peregrine falcons, coastal development, and hurricanes. But since the overfishing of horseshoe crab in the 1990s, which caused a decline of the red knots’ critical food, the population has plummeted.

The migration route of red knots from Tierra del Fuego in South America to their breeding grounds in Canada. Graphic: Guilbert Gates.

Rufa red knot (Calidris canutus rufa) is a large sandpiper weighing an average 4.8 ounces with a 20-inch wingspan, about the size of an American robin. There are three subspecies in North America and six species worldwide; rufa red knot is the eastern North American species. Their characteristic rusty ‘rufous’ plumage is the perfect camouflage in the Arctic breeding grounds to blend with wild grasses and wildflowers. In the fall they molt to a bland grey and white coloring for protection on the beaches of their South American wintering grounds.

Red knots and horseshoe crabs share a long history of interconnection, a delicate synchronicity of nature—the spawning of millions of horseshoe crab eggs in the Delaware Bay each spring is precisely timed with the red knots’ arrival in May. On its northward migration, the red knots’ key stopover is Delaware Bay—roughly half-way from their wintering grounds, Tierra del Fuego in Argentina to the Arctic nesting grounds.

At Delaware Bay, the red knot must quickly refuel for energy to successfully complete the last leg of the long journey to the Arctic and breed. This event has been evolutionarily perfected over millions of years. When the red knots arrive, they are exhausted and starved after four or more days flying nonstop from South America and must refuel with horseshoe crab eggs which provide easily digested protein. They can double their weight during this 12-14 day stopover, and this body fat is necessary to reach the Arctic and successfully breed.

The red knot survival is profoundly linked to the crabs, a species older than dinosaurs. Photo: Jan Van De Kam.

Almost the entire eastern North American population of red knots will congregate in Delaware Bay during spring migration. “Historically, more than 100,000 red knots stopped at Delaware Bay each spring. By 2004, this number had dropped to little more than 13,000” (American Bird Conservancy, February 2015). Although the horseshoe crab population is reported to have stabilized since improved protections restrict overfishing, concerns remain as to whether the crab population will recover fast enough for the red knot. Volunteers protect the Delaware Bay during spawning season, and horseshoe crabs used in medical research are also returned alive back to the ocean.

Climate change has now emerged as a greater threat. In 2014, the rufa red knot was listed as Threatened under the Endangered Species Act and is the “first bird listed explicitly because its existence is imperiled by global warming” (“Red Knots Are Battling Climate Change—On Both Ends of the Earth,” Deborah Cramer, Audubon Magazine; May/June 2016). Rising sea levels and storms may engulf the red knots’ coastal habitat, and erratic temperatures can cause timing ‘mismatches’ (asynchronies) in nesting. Chicks need to hatch simultaneously with the insects’ hatching to guarantee abundant food.

Coastal habitat conservation efforts in Michigan which benefit the endangered piping plover, pitcher’s thistle, Houghton’s goldenrod, and Lake Huron tansy also benefit the rufa red knot, as the species utilize similar habitat. Red knots are an uncommon migrant in Michigan and never abundant here, but could be spotted along Great Lakes shorelines heading north in late May or again in late July through September on their southern migration. In Michigan’s Upper Peninsula it is possible to spot a red knot at MNA’s Lake Superior Nature Sanctuary or Whitefish Point, and in the Lower Peninsula, Point Mouillee State Game Area, Tawas Point State Park, and Lake Erie Metropark at the southeastern point of the state. 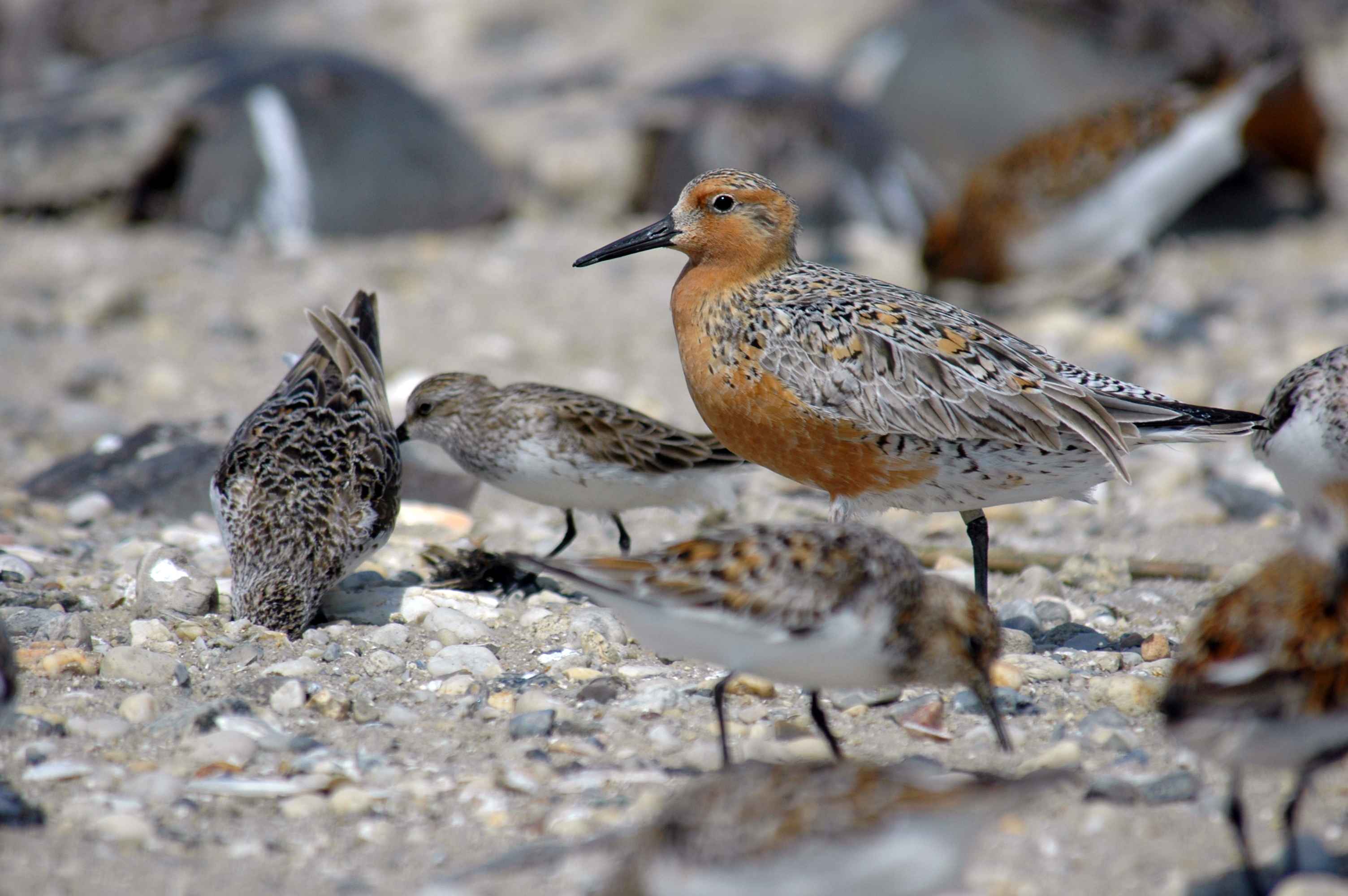 Half the species of shorebirds in the United States and Canada are either endangered or of special concern, according to the U.S. and Canadian Shorebird Conservation Plans. The Western Hemisphere Shorebird Reserve Network has adopted a conservation strategy that is currently focusing on protecting 97 critical sites internationally, which includes Delaware Bay. For more information visit http://www.whsrn.org/western-hemisphere-shorebird-reserve-network and the USFWS at http://www.fws.gov/northeast/redknot/ to learn more.

This year, the Michigan Nature Association is recognizing one decade of National Pollinator Week, put into place by the U.S. Senate to recognize the critical role pollinators have in ecosystem health and agriculture, and to recognize “the value of partnership efforts to increase awareness about pollinators and support for protecting and sustaining pollinators.”

National Pollinator Week is a time to share the news about the need for healthy pollinator populations (bees, birds, butterflies, bats and beetles) and what can be done to protect them. This important awareness week addresses the devastating effects that declining pollinator populations will continue to have on agriculture and ecosystems that we all rely on.

The National Pollinator Week is now celebrated and recognized by countries across the globe, where many are celebrating healthy ecosystems and the services provided by pollinators and their positive effect on all of our lives, from supporting wildlife to keeping watersheds healthy.

For more information, visit The Pollinator Partnership, the largest non-profit dedicated exclusively to promoting the health of pollinators through conservation, education, and research.

To see a list of events taking place in Michigan this week, check out http://www.pollinator.org/pollinatorweek/events#Michigan:

Pollinator Day 2017
6/24/2017, 12:00 PM
34051 Ryan Road, Sterling Heights, 48310
“Eckert’s Greenhouse is hosting an Annual Pollinator Day! Go to three different stations to learn about the importance of Butterflies, Bees, Birds and Bats! Let us help you make a friendly pollinator garden from our wide variety of annuals and perennials.” http://www.eckertsgreenhouse.com/specials–events.html

Free Seminar: Create A Garden To Attract Pollinators
6/24/2017, 10:00 AM
English Gardens, West Bloomfield, 48322
“Our experts will share tips on creating a garden that pollinators will love to call home.” http://www.englishgardens.com/events/create-a-garden-to-attract-pollinators/
Contact information: ewinger@englishgardens.com

Stewardship Workday At Bluffs Nature Area
6/24/2017 9:00 AM
222 Sunset Rd, Ann Arbor, 48103
“Bluffs Nature Area offers trails for bikers, walkers and runners along with interesting views of the river and a small hidden prairie. Volunteers are needed to pull invasive plants that provide little food for wildlife and crowd out native wildflowers.”
www.a2gov.org/NAP; 734.794.6627; NAP@a2gov.org

For a complete look at all National Pollinator Week events in the U.S. this week take a look at this map: http://pollinator.org/npw_events.htm.

Walking Paths & Protected Areas of the Keweenaw is a guide that features publicly accessible nature and wildlife sanctuaries, preserves, and parks located in Houghton and Keweenaw Counties on Michigan’s Keweenaw Peninsula that have been protected through citizen action and private initiative.

These special places provide both residents and visitors the opportunity to encounter a variety of native habitats, interesting plant species, and unique geological features in this nothernmost part of Michigan, as well as a glimpse of Michigan before European settlement and the nineteenth century copper boom. These are places where natural processes can unfold with minimal human interruption or alteration. 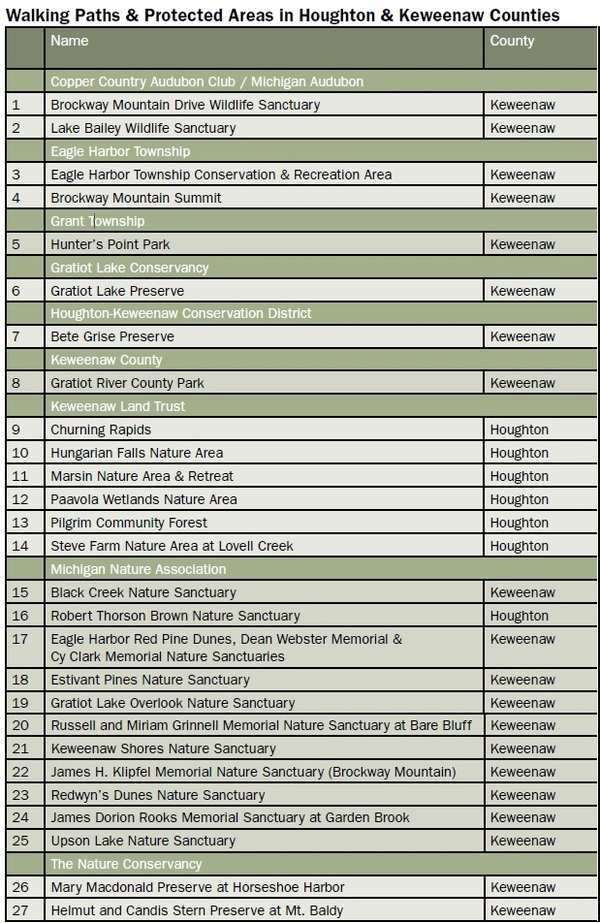 Reserve Your Copy Before It’s Available In Stores!

MNA is no stranger to the fight to protect vulnerable species. For 65 years MNA has worked hard to secure and restore habitat and manage lands so rare plants and animals have a chance. A new endangered species listing hits hard even when it comes with the good news that federal protections will be put in place to help recover the species.

It also hits hard because of the news from Washington D.C. and Lansing about proposed deep cuts to programs that protect these vulnerable species.

The current political climate underscores the foresight of MNA’s founders. 65 years ago, a small group of spirited individuals took matters into their own hands and established an organization to do what they felt government was ignoring. How many more endangered species listings would there be without groups like MNA?

So today when so many headlines bring dismay, you only need to open the pages of Michigan Nature to find some really terrific stories of great work to protect our natural heritage. Stories made possible by people who deeply care and give from the heart – landowners, members, donors, volunteers and you.

Partnerships and collaboration are key. If the last 65 years have taught us anything, they’ve taught us that we cannot do it alone.

MNA’s mission brings people together so we can build a brighter future. We have been doing so for 65 years and will continue to do so for the next 65 years and beyond. Thank you for doing your part.