Double the Impact of Your Donation!

There is still time to make your tax-deductible gift for 2016 and have your donation matched dollar-for-dollar for the protection of Michigan’s natural heritage.

Thanks to a generous Trustee challenge grant, all gifts to MNA of $100 or more will be matched, dollar-for-dollar, up to $10,000.

All donations will provide sustainable support to help MNA acquire, protect, and maintain critical habitat for rare, threatened and endangered species throughout the year.

Double Your Impact by December 31.

Thank you for all that you do to help MNA build a brighter future for Michigan! 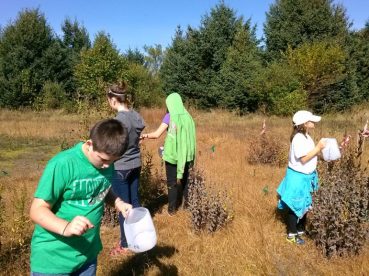 Native prairie restoration fights invasive species and helps the endangered ones (Great Lakes Echo): From flower pots to 100-acre lots, planting native prairie plants is increasingly important as they face threats from invasive species and human development. Prairies in the Great Lakes region are known for hosting bobolinks, wild turkeys, butterflies and a vast array of wildflowers. A program was created to collect seeds from native plants to promote prairie growth and engage volunteers with the environment. It’s something that everyone can help with.

Researchers creating warning system for low oxygen water (Great Lakes Echo): Researchers are developing a system to warn water managers when unpalatable, harmful water from Lake Erie is headed their way. The project, with $1.5 million in federal funding, could give water treatment plant operators time to prepare to treat water that is hypoxic by predicting the movement of oxygen-depleted Lake Erie water. Hypoxia occurs when dissolved oxygen in a body of water is depleted to a level that is harmful to aquatic organisms. This is a particular problem in the central basin of Lake Erie, where it’s deeper.

Mini-tsunamis a hazard in the Great Lakes (Great Lakes Echo): The Great Lakes have their own miniature version of tsunamis – more than 100 times per year. That’s according to new research led by the University of Wisconsin Madison. The name of these waves – and the danger that comes with them – are relatively unknown to those in the region. Their name, meteotsunami, is a contraction – broken down, it means meteorological tsunami. They’re about a foot high. And they’re not caused by earthquakes like actual tsunamis. Researchers are now looking into a way to predict when these mini-tsunamis might occur in order to warn beachgoers. According to the study, Lake Michigan is most prone to these mini-tsunamis, followed by Lake Erie and Lake Huron.

Michigan Dune Alliance helps protect Michigan’s iconic sand dunes from invasive species (Model D): From the towering glory of Sleeping Bear Dunes to more modest southern Lake Michigan beaches, perhaps nothing in our state represents “Pure Michigan” better than our iconic sand dunes. But as with so many of Michigan’s fragile native ecosystems, invasive weeds threaten to strangle the dunes. Exotic fungi and invasive bugs are killing the trees that are part of the dune ecosystem, while invasive water plants are choking coastal marshes and interdunal wetlands. There are around 550 miles of coastline on the Mitten’s west that are under siege from alien invaders. Luckily, the combined forces of the Michigan Dune Alliance are on a search-and-destroy mission throughout that long stretch of sand.

The IRA Charitable Rollover was made permanent last year but must be done soon to count for 2016. Take advantage of this special tax treat for the year-end giving season!

Here’s how it works:

The IRA Charitable Rollover is permanent, so you can begin planning your 2017 tax-free gift to MNA!

P.S. You can double your impact with a tax-deductible gift to protect Michigan’s rare, threatened and endangered species of $100 or more, up to $10,000, through a generous dollar-for-dollar matching challenge grant!

The Michigan Nature Association recently hosted a project to track saw-whet owl migration at Lefglen Nature Sanctuary in Jackson County. The project leader and head owl bander was Selena Creed, who has years of experience banding raptors in the Mackinac Straits.

Saw-whet owl migration routes are well-documented along the Great Lakes shoreline, but the routes they take through inland Michigan are less understood. Given that the Sharonville State Game Area and surrounding wooded complex (which includes Lefglen) represents one of the largest contiguous habitat blocks in southeast Michigan, researchers believe it was likely they would be moving through here if they travel inland. 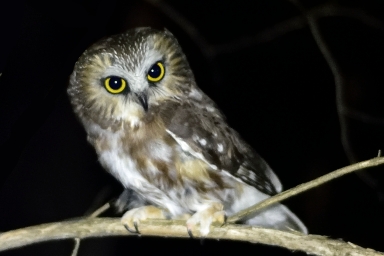 This year a total of 13 saw-whet owls were captured across five nights using mist nets and an audio lure. This is more than enough to prove that saw-whets are using Lefglen Nature Sanctuary and the larger surrounding habitat complex as an inland migration route through Michigan!

Selena and the team examined mostly female and hatch year owls, but were treated to a couple second year/after second year/male owls as well. One owl was a recapture that had been banded earlier this fall at Hillardton Marsh, Ontario – Selena states that recaptures are somewhat rare.

Thank you to Gary Hofing for taking very high-quality photos that provide great documentation of the banding process and measurements/data collected from each bird, including how they are aged using a blacklight to see wing molt pattern.