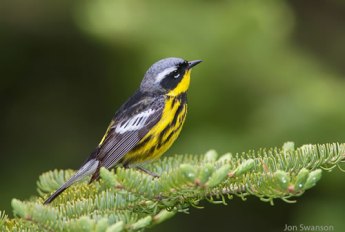 Great Lakes forest birds mostly stable or increasing (Great Lakes Echo): A record study that took 25 years and 700 birdwatchers and researchers has found that most birds at three different national forests in the Great Lakes region are either increasing or stable. The study is another great example of the important role volunteer bird watchers can play in tracking populations of the birds they love. The count became an annual tradition for many bird enthusiasts. The study is cause for guarded optimism about the state of forest birds in the Northwestern Great Lakes Basin.

Fish slides, anyone? (Great Lakes Echo): Sturgeon go back to the river to spawn safely. But hydroelectric dams often block rivers, forcing fish to spawn in more dangerous spaces. Listen to this podcast to learn more about how the River Alliance of Wisconsin is giving fish a little boost.

Healthy ravines for healthy watersheds (Great Lakes Echo): Created by the same retreating glaciers that carved and filled the Great Lakes, you could say lakeshore ravines are the lakes’ blood relatives. Great lakes ravines face deterioration at the hands of invasive species and pollution. Conservationists are working to address this issue.

Rare butterfly rests its wings in unique SE Michigan ecosystem (Great Lakes Echo): Listen to WKAR’s radio story about Kevin Lavery’s expedition to find the endangered Poweshiek Skipperling. It’s only found in a half a dozen places on Earth, and two-thirds of them are in Michigan. The rare butterfly once thrived on the Great Plains is now fighting for its survival in Michigan.