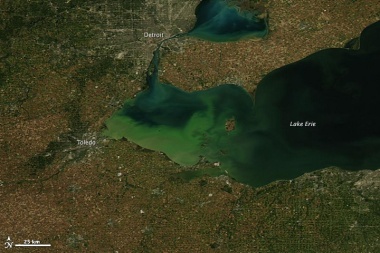 In a story from the Great Lakes Echo, Lake Erie has yet again produced record-high algae blooms. In 2011, the amount was the worst ever recorded with 2013 coming in close.

Lake Erie has been used as a source of water for farming and drinking and the increasing toxicity poses harm to the environment.

According to Discovery News, algae blooms are a natural part in the life of an aging lake, but have been greatly increased due to human activity.

An explanation of algae 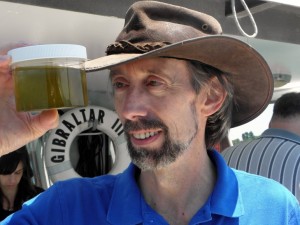 Algae are common members of aquatic communities. Often in the form of green plants like seaweed, these plants grow and are green because they contain chlorophyll. Algae usually doesn’t pose problems in bodies of water, but algae blooms are of greater concern. These green-blue scum masses are full of harmful cyanobacteria, containing threatening cyanotoxins.

The US Centers for Disease Control (CDC) defines cyanotoxins as “a diverse group of chemical substances that are categorized by their specific toxic effects. In humans, cyanotoxins can affect the nervous system, gastrointestinal system, liver and increase tumor growth.

Click here to read the fact sheet which includes symptoms of cyanotoxin consumption and contact and treatment.

The toxic dangers in Lake Erie

The problem facing Lake Erie is not only that it’s turning a pernicious green color, it’s under silent attack by toxins in water runoff making their way into the lake. Fertilizer from agricultural practices in recent years has contributed to this issue. Climate change may also be contributing to the issues surrounding Lake Erie, causing more storms, higher water temperatures and less control of fertilizer runoff. 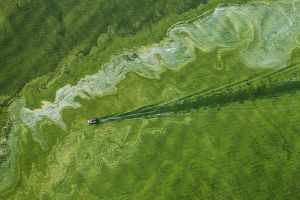 Nutrients in the fertilizer runoff have contributed greatly to the growth of cyanobacteria, fertilizing the toxin rather than the intended on-land crops. Not only is this bacteria harmful for humans to consume in drinking water, it creates “dead zones” in different areas of lakes. A dead zone happens when the bacteria consumes most of the oxygen in a particular area of a lake, so that other organisms are deprived of that oxygen and die.

A plan of action

In Michigan, scientists hope to continue monitoring the water, although the high amount of algae blooms has been a great cause of stress and concern. Recently, President Obama reauthorized a federal law which allocates $82 million for studying and monitoring algae blooms. This time, the Great Lakes were included. 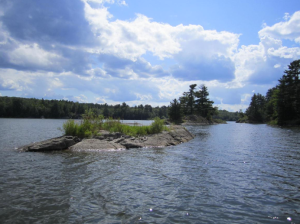 Michigan’s Deer Lake could be taken off polluted hot spot list (Great Lakes Echo): Deer Lake, located in Marquette County in the Upper Peninsula, has endured decades of costly cleanup which may soon pay off. The lake had been contaminated by mercury from nearby mines. Since the lake was listed as an area of concern in 1987, the restoration process has been well underway and Deer Lake could be taken off the polluted hot spot list in the next few months.

Michigan voters favor changing energy mix — especially if it doesn’t cost anything (Great Lakes Echo): A poll by Public Sector Consultants revealed that more than 42 percent of Michiganders would like to see the use of coal burning for electricity significantly reduced over the next 25 years. Still, in another poll conducted by Denno Research, only 13 percent would support drastic movement away from coal in the next decade, even if it were to mean rising costs of electricity.

Geothermal industry grows with help from oil and gas drilling (New York Times): Geothermal energy, a mostly forgotten way of harvesting energy, involves drilling into the ground and using the earth’s hot air for energy purposes. Despite being less than one percent in the world of ways to harvest energy, the United States is still the leader in this industry and it’s slowly growing. 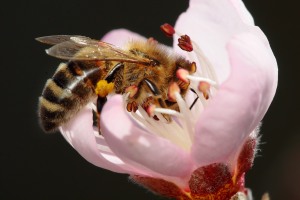 A bee pollinates a peach flower. Photo courtesy of wikipedia.org.

With summer in Michigan comes the hot sun along with plenty of critters coming out of their habitats. Among animals and insects that emerge, the honey bee is one of them, essential to maintain life of plants in ecosystems and the creator of sweet, gooey, golden honey.

The importance of bees

Bees are one of the main pollinators for several plants including flowers, fruits and vegetables. Bees have a hand in much of the produce Americans eat. Pollination is the process of moving pollen from one part of flowers to another, causing fertilization. This contributes to growth and production of flowers, fruits and vegetables. This process is important to maintaining ecosystems and natural plant communities.  Without insects like bees to pollinate flowers and other crops, the entire ecosystem is affected, causing a decline in natural flora in Michigan, an issue that has already arisen due to many other factors. Click here for more facts about bees.

A large honeycomb. Photo by Julie Grant courtesy of Michiganradio.org.

Colony collapse disorder, or CCD, is a disorder in bee colonies connected to their decline in recent years. Scientists have not pinpointed a specific cause of this decrease but infer that climate change, pesticides, mite infestations and bee disease have all contributed to CCD, according to an article in the Washington Post. Hives have been dying each year, and it’s not uncommon to lose at least five percent of colonies in a winter, said a 2011 article from Michiganradio.org. According to the article, there was an overall 30 percent nation-wide decline at the time.

With CCD on the rise, the amount of crops produced annually falls. This affects the entire U.S. but is a large problem in Michigan because of the state’s agricultural industry. Farmers have seen a decline in their crops. Michigan fell in pollen production in 2013, to ninth in the nation from seventh. Not only is CCD bad for crops and honey production, it can cost beekeepers thousands of dollars.

President Obama showed his support for stopping CCD in his launch of a task force related to this specific issue on June 23, according to CNN.  $50 million will be allocated for the purpose of research to stop CCD and help restore bee colonies and the economy. According to a statement from the White House, bees contribute “more than $15 billion through their vital role in keeping fruits, nuts and vegetables in our diets.” Programs like this will help the overall nation to try and stop the decline of bees and boost the economy.

Back in February, the U.S. Department of Agriculture announced the allocation of $3 million to Midwestern states including Michigan for the assistance of farmers who would participate in projects aimed at improving pollinator health.  “The future security of America’s food supply depends on healthy honey bees,” said Agriculture Secretary Tom Vilsack in an MLive article. 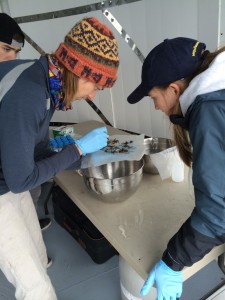 A University of Michigan research scientist and her research assistant sift through debris from the water. Photo courtesy of Great Lakes Echo.

Researchers troll for plastic on Great Lakes fishing boat (Great Lakes Echo): Captain David Brooks of the Nancy K boat headed out to Lake St. Clair in pursuit of catching bits of plastic in the water. His curiosity was piqued by the fact that a sweater he owned was made of plastic and bits of plastic washed down the drain when he cleaned it. His intention with the plastic hunt in the water was to find out how harmful these bits of plastic can really be to the environment.

Bracing for Lake Erie algae threats to drinking water (Great Lakes Echo): The 2011 all-time high record of the algae blooms in Lake Erie was followed up by a close second high in 2013. Scientists and government organizations are becoming more concerned about the dangers posed by the toxic algae crowding the lake. Researchers take a closer look at the water, algae and problems surrounding it.

California approves forceful steps amid drought (New York Times): State officials have moved forward with implementing harsh repercussions for over-using water. Citizens could be fined $500 per day for simply washing a car or watering a garden. Still, convincing urban residents of the seriousness of the drought has been a difficult task. 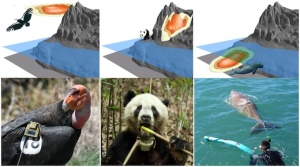 3-D images captured with help from a panda, California condor pair and a dugong,.

Animals live in 3-D, now scientists do, too (Conservation Magazine): Finding animals’ home ranges have been part of recent studies. These home ranges would help scientists study animals and their habitats and employing 3-D mechanisms has helped them to get a closer look at animal life.

Still poison: Lead bullets remain a big problem for birds (Conservation Magazine): The Bipartisan Sportsman Act of 2014 may have given different parties a chance to unite in support, but would have had other implications for birds during hunting season. The bill would have called for an exemption for lead ammunition and fishing tackle from “longstanding regulations.” Recent studies have shown a growing issue with lead poisoning leading to the death of birds.