A mute swan glides atop the water. Photo by Karen Stamper, courtesy of the Great Lakes Echo.

Local policy revision spares non-aggressive mute swans (Great Lakes Echo): The invasive mute swan species growth in Michigan has been exponential, increasing by 10 percent each year since 2010. Currently there is legislation in place in west Michigan, authorizing the elimination of these creatures. After a recent survey found that people would prefer only the aggressive swans be killed, the Hutchins Lake Association is trying to negotiate a new plan.

Researchers look to spin grass into beef (Great Lakes Echo): The demand for grass-fed cattle is rising in Michigan. With a $460,000 federal grant, researchers from Michigan State University will explore the economic profitability of these cattle as well as environmental friendliness and encouraging consumers to eat frozen meat.

Changing fishery discard practices has cascading effect on ecosystems (Conservation Magazine): Unwanted fish are thrown over the side of sea vessels and fisheries experience up to 40 percent of discard on their trips. Fishing has cascading effects on wildlife, researchers found, because of the removal of some fish many species feed on. Research shows the resolution to this issue is “complicated.” 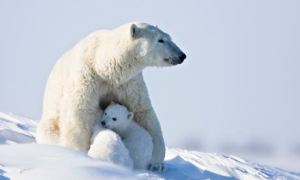 A polar bear with her two cubs. Photo by Frank Lukasseck, courtesy of The Guardian.

Fewer polar bear cubs are being born in the Arctic islands, survey finds (The Guardian): Bear cub births in the Arctic islands of Svalbard decreased by 10 percent in 2014 alone, according to a small survey. Global warming continues to melt sea ice on which polar bears use to hunt seals. Of 29 female bears researchers tracked, only three gave birth to cubs that year, much less than the usual one-third of female bears to give birth.