The black tern is a rare bird species that has recently been found to still have active colonies in Michigan Nature Association sanctuaries. Two black tern colonies were discovered, which is a positive sign since there has been a decline in the bird’s colonies over the past decade. 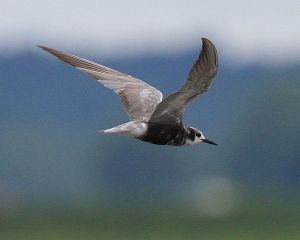 A black tern in flight. Photo courtesy of Wikimedia Commons.

The black tern’s striking features make it distinguishable from all other tern species in Michigan. Its black head and underbody, and gray wings, back and tail are very visible to surveyors. The bird is the smallest of the terns in Michigan, with an average length of only 9.75 inches and an average wingspan of 24 inches. The black tern is known for being highly acrobatic while in flight, often plunging down to the water’s surface to pick up aquatic insects.

Black terns live in marsh communities, preferring coastal plain marsh, Great Lakes marsh and emergent marsh. Within these habitats, the bird will build its nest on floating vegetation at the water’s edge. Because of this, the nest and eggs are vulnerable to damage from wind or high water levels. Boat wakes can also drown the nests or submerge eggs. Black tern nests also face the threat of predators when the adult bird is away. Raccoons, crows and snapping turtles are among the predators that will steal young black terns from their nest. It is rare for more than one chick to survive.

These obstacles explain why the black tern is on the “special concern” list and has a state rank of “S3,” meaning it is vulnerable. Habitat desctruction and predators threaten the existence of the black tern, and MNA continues to provide a safe home for the black tern in its sanctuaries. To learn more about MNA’s initiatives, visit www.michigannature.org.