Stabenow calls for passage of Senate farm bill (East Village Magazine): U.S. Senator Debbie Stabenow joined with Michigan agricultural and conservationist leaders Wednesday to call for the passage of her 2013 Farm Bill. The bill is a major reform of past agriculture programs, and yields $24 billion in spending cuts. The reforms increase investments to create more jobs in the agriculture industry while aiming to save taxpayer dollars overall. The Senate Committee passed the bill by a strong bipartisan vote on May 15, and a final Senate vote is expected next week.

Restoring an ancient Great Lakes fish (Michigan Water Stewardship Program): Federal and state officials have joined with the Gun Lake Band of Potawatomi to rebuild the lake sturgeon habitat in the Kalamazoo River. Currently, the lake sturgeon population is declining below sustainable levels in the area, and fewer than 125 exist in the Kalamazoo River today. Conservationists are attempting to raise these numbers by reconstructing areas of cobblestones, rock and sand at the bottom of the river, which the sturgeon use for spawning.

Does Climate Change Impact Tornadoes? The Scientific Jury Is Still Out (TakePart): Though multiple theories exist, some scientists are beginning to suspect that stronger tornadoes, such as the twister that hit Moore, Oklahoma on May 20, may be linked to climate change. Humid air masses coming off the Gulf of Mexico could increase from warmer global temperatures and, as a result, increasingly clash with cold northern air masses to form more tornadoes. Still, while the Intergovernmental Panel on Climate Change acknowledges this hypothesis, the organization does not believe there is enough data to prove it true at this time.

Honeybees, other bees put to the test pollinating Michigan blueberries (mlive): Planting wildflowers near blueberry plants may increase the crop’s yields, according to a recent study conducted at Michigan State University. The wildflowers attract bees and other pollinating insects, which additionally support blueberry plants. These findings will lead to a larger study funded by the U.S. Department of Agriculture, testing ways to make full use of pollination on a broader scale.

To me, one of the most interesting things about the outdoors is its variety. Each species provides a vital link in its habitat, regardless of how small it may be. One of Michigan’s tiny yet fascinating creatures is the Poweshiek skipperling.

Though moth-like in appearance, the Poweshiek skipperling is a small butterfly that resides in tallgrass prairie. Its upper wings are a dark grayish-brown tone, with orange markings on the forewing. A distinctive pale area on the butterfly’s hindwing sets it apart from moth counterparts, as does a dark green stripe on Poweshiek skipperling caterpillars. Males and females are very similar in appearance, as they both have a wingspan of roughly one inch. However, females can be identified by a subtle brand on the forewing. 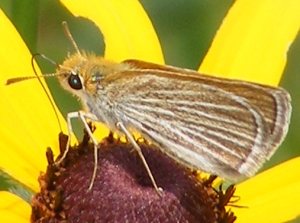 A Poweshiek skipperling on a black-eyed Susan.
Photo: Dwayne Bagdero.

The main flight period for the Poweshiek skipperling is mid June to mid July. During this time, the butterfly can be spotted fluttering low in the grass near nectar sources, especially tending to prefer black-eyed Susan flowers in Michigan. Its flight involves excessive wing movement that exerts little forward velocity, distinguishing the species from other butterflies and moths. This slow, bouncy pattern resembles skipping, which gives the Poweshiek skipperling its name.

The butterfly has been sporadically reported in various areas throughout the Midwest, as far east as Ohio and as far west as Minnesota. In Michigan, the Poweshiek skipperling resides in select prairie fens in the southeast region. These fens are wetland communities mainly composed of sedges and grasses, and are one of the most biologically diverse ecosystems in Michigan. Prairie fens house over two dozen of the state’s rarest plants and animals, including the Poweshiek skipperling.

However, because Michigan Poweshiek skipperlings are limited to this specific prairie fen habitat, they are experiencing a severe population decline and are currently state threatened. Prairie fens are extremely delicate areas, limited by invasive species, gravel mining, and woodland invasion. Without scheduled burn or mow periods, fen plants grow too tall to house this sensitive insect, limiting their survival.

Addressing this concern, MNA protects prairie fens in 14 of its sanctuaries in southern Michigan. In order to prevent the fens from succeeding into forest or shrubland, MNA holds prescribed burns of these areas. Though some of MNA’s especially sensitive fens have restricted access, Lefglen Nature Sanctuary, Lakeville Swamp, and Goose Creek Grasslands are all open to the public. MNA also holds scheduled field trips and work days in many of these areas, including upcoming volunteer days at Goose Creek Grasslands, located in Lenawee County, on June 10th and June 14th.  These visits allow guests to help protect these delicate habitats.

Plovers rebound with Conservation efforts (Grand Traverse Insider): Current measures to protect endangered piping plovers, small sparrow-like birds found on Great Lakes shores, are proving effective. The bird was listed as endangered in 1986, when only 12 pairs remained. The plover population has been slowly rising since then, with 58 pairs recorded last year. Attempting to raise these numbers, conservationists are breeding the birds in protected areas of the Platte River Mouth, incubating abandoned chicks and eggs and educating the public to stay away from areas reserved for rehabilitation. Though it will take some time to reach the recovery goal of 150 pairs, conservationists remain optimistic.

Urban blackbirds are more cautious than country birds (Conservation Magazine): Recent studies show that city-dwelling blackbirds show greater restraint than those from rural areas. A team of researchers collected 28 young blackbirds from the urban atmosphere of Munich, Germany as well as 25 blackbirds from a nearby forest. The team found that city birds took an average of half an hour longer than rural birds to perch near an unfamiliar object, which they say is likely a result of genetic personality differences.

Experts: Mosquitoes in Muskegon County showing normal activity for late spring, no West Nile Virus cases confirmed (mlive): Though the recent mosquito invasion around Michigan may seem especially intense, experts say that these numbers are nothing out of the ordinary for the spring season. April’s heavy rainfall combined with warm temperatures provided the ideal habitat for spring mosquitoes, which are expected to experience a population peak for the next 2-3 weeks. Experts say that, though West Nile Virus does not appear to be particularly present in Michigan this spring, it is important to watch for the virus this coming summer.

Student completes 216-mile kayak trip for fundraiser (Detroit Free Press): A student from Western Michigan University completed a 216-mile kayaking journey on Tuesday. Cody Ledsworth began the trip on Wednesday, May 15, paddling against the wind down the Muskegon River. Throughout the trip, he gathered donations for Parkinson’s disease research, inspired by his grandmother who has the disease. The 20-year-old eventually raised more than $2,300 for the nonprofit Parkinson’s Disease Foundation, far surpassing his original $500 goal. 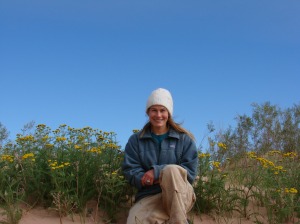 Adrienne has been on the MNA staff for two years and first worked as a contractor. She was a volunteer and steward for some time before joining the staff. Adrienne oversees all of the Upper Peninsula sanctuaries from Baraga County to Chippewa County, where she coordinates and conducts sanctuary maintenance and monitoring, writes and executes management plans for each sanctuary, performs plant and animal surveys, organizes and recruits volunteers, collaborates with partner organizations, and acts as an ambassador for MNA throughout the Upper Peninsula.

Adrienne comes from a long line of outdoors people and found her interest in the environment while leading nature walks for children in her neighborhood. She graduated with a bachelor’s degree in environmental interpretation and worked for 15 years in a number of field jobs in environmental science and conservation. She eventually conducted plant surveys at Pictured Rocks National Lakeshore and completed her master’s degree in biology.

We sent Adrienne a few questions to learn a little more about her experiences at MNA. Check out her responses below!

Q: What is your favorite part about being a regional stewardship organizer?

A: Getting to work in all of the U.P.’s varied landscapes and habitats, the opportunity to spend time with some of Michigan’s most rare and threatened species, and the relationships I’ve developed with many of MNA’s outstanding volunteers and members. And believing that I am making a direct contribution to the conservation of native landscapes and biodiversity.

Q: What is your favorite Michigan species (flora or fauna) and why?

A: I don’t tend to think that way, so I don’t have an answer to that question! I love them all. Except the noxious non-native ones that threaten native ecosystems. I did my master’s research on some of Michigan’s rare native orchids, so I do have a special affinity for them.

Q: If you could be any species (Michigan native or not), what would you be and why?

A: Um, maybe a wood duck? I could walk, swim and fly, and live in a tree. Then again, maybe I’d prefer to be a non-game species.