On Saturday, March 10th, MNA members and volunteers had the opportunity to help clean up the Wilcox-Warnes Nature Sanctuary by participating in a Volunteer Day devoted to ridding the sanctuary of invasive species. Approximately 6-8 community members and first-time volunteers spent this warm March day removing buckthorn from the sanctuary to protect the native plant life. 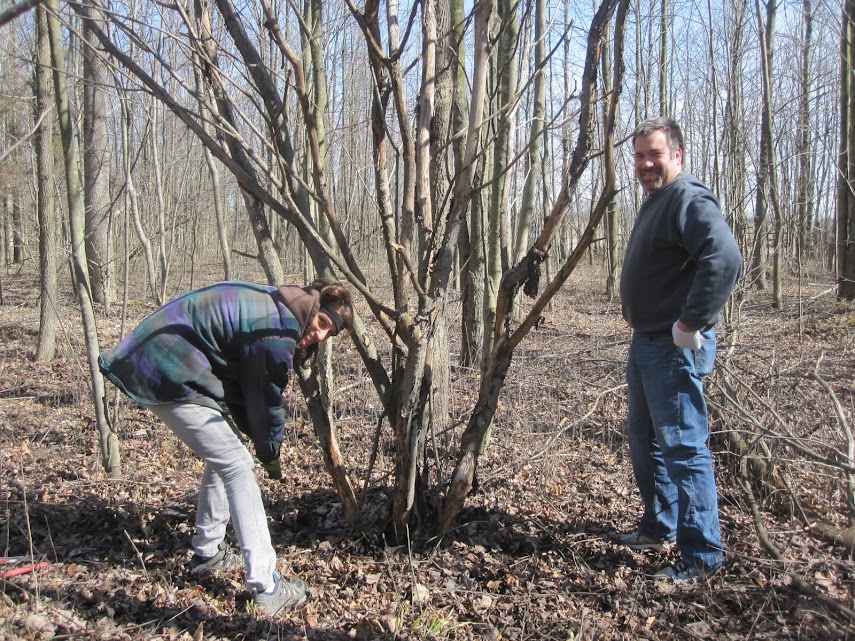 According to MNA Regional Stewardship Organizer, Katherine Hollins, participants were able to remove a large amount of young buckthorn by hand-pulling, as well as using saws and herbicides for the bigger plants. As an invasive species to the sanctuary, buckthorn provides a threat to other plants by producing shade that prevents other vegetation from growing. Buckthorn can also crowd out other plant life, which can kill native species. According to Hollins, buckthorn is always growing in this sanctuary, as “seeds can stay viable for 8 years.” Because of this, MNA is always looking for new volunteers and participants for workdays at Wilcox-Warnes as well as the many other sanctuaries across the state. For a list of upcoming Volunteer Days and other MNA events, please visit the MNA Events Calendar.

Macomb County’s Wilcox-Warnes Nature Sanctuary has been an MNA property since 1975, but was originally part of a land-grant awarded by Andrew Jackson in 1833. As one of the MNA’s Showcase Sanctuaries, Wilcox-Warnes is a sanctuary that features a diverse habitat, with areas containing both mature and mesic-southern forests. Other interesting characteristics of this sanctuary include its distinct plant and animal life. With tulip trees, monkeyflowers, warblers, and even great horned owls, this sanctuary is sure to create a unique experience for each visitor.

By Tina Patterson and Dave Wendling

A great group of people joined us at the Dauner Martin Odyssey tour! Photo by Marianne Glosenger

While the day started off with soft showers, by the time we arrived at Dauner Martin the skies were clearing. The sun had come out and with it, a great group of hikers excited to be a part of the Odyssey! Paul and Sue McEwen did a fabulous job of spreading the word and were ready and waiting with their friend John Smith, who added so much to our day. John was exceedingly knowledgeable about the sanctuary and was able to identify many species in a very interesting and informative way. He also pointed out several butterflies to us including a tiger swallowtail, red admirals, and a comma butterfly. Some great photographers were also part of the group, with Marianne Glosenger of Empire looking forward to entering her photos in this year’s photo contest. Seeing some of her work on this trip, we know she will be a contender. Being a part of the Odyssey and meeting so many great people is what makes this such a special time; getting to know people along the trail and sharing the “ooohhhs” and “ahhhs” as we saw massive ash and cherry trees, the first swallowtail butterfly of the season, as well as just being a part of a perfect day.  Photos of our day at Dauner Martin should be in the next issue of the Midweek Times, thanks to a staff photographer who shot some candids of the 21 people who helped make our day great.

The well-maintained trail at Dauner Martin. Photo by Marianne Glosenger

As we entered the 155-acre sanctuary in the city of Fenton, one of the first things that caught our eyes was a group of several small Ohio Buckeyes that were located only at the Dauner Road entrance. It soon became evident that the 4.5 miles of interconnected trails were very well marked and kept cleared by the great efforts of the stewards, and signage was strategically placed along the trails so that no one would lose their way. Several benches were located along the trails, some of which were made by Eagle Scouts; the scouts also constructed a very nice boardwalk over a wet area of the sanctuary.

The major habitat of the sanctuary is second growth oak-hickory forest along with pine plantations and wet depressions. Several large trees were seen; notable were cherry trees, and a very large ash tree that had sadly been killed by the emerald ash borer. There were not a lot of spring wildflowers in bloom; however, we did see several species of violets as well as Jack-in-the-pulpits.  Dave pointed out several moss-covered logs and decaying wood that were providing a habitat for mushrooms, part of a healthy forest ecosystem.

Halfway through the hike Paul stopped to explain all the stewardship activities that were going on at the sanctuary including the many work days they have scheduled to remove invasive species. Paul and Sue invited everyone to come back to help on scheduled work days and be a part of future field trips. We know we want go back to Dauner Martin, and hope you will, too!

Check out more photos from our visit to Dauner Martin on MNA’s Flickr page!

Brockway Mountain Drive is the highest road in the Midwest and offers breathtaking views of Lake Superior and the jagged cliffs along the Upper Michigan coastline. Among the many varieties of plants you can find patches of wild strawberries as well as rare flowers like thimbleberry, heart-leaved anica, wild lilac, and small blue-eyed Mary. Travel + Leisure writer Briana Fasone recommends stopping along the Keweenaw Peninsula to enjoy orchids, running rivers and migrating hawks that often linger around the bird-watching point in mid-April.

Since 1973 MNA has been involved with conserving land in Keweenaw County, and now owns a total of 15 nature sanctuaries there including four Brockway Mountain Drive properties. Brockway is the region’s prime spot for springtime flora, and we recommend hiking through the sanctuaries to fully enjoy the spring colors and fragrances! For more information about visiting MNA’s Keweenaw and Brockway sanctuaries, you can visit our website or check out this online sanctuary guide!

By Tina Patterson and Dave Wendling

The weather did not cooperate as we kicked off the Odyssey at Timberland Swamp on Sunday, April 15. Despite our best attempts to guarantee perfect weather, we had to call the hike off as thunder showers threatened all day. All on the RSVP list were notified (a reminder to everyone to please RSVP the office of your intent to join up on any of the hikes). In spite of the showers, six intrepid hikers braved the elements to venture into a very wet sanctuary and were privileged to see lots of wild flowers, including spring beauties and white trillium.

We don’t want to miss any of our spectacular Showcase Sanctuaries so we have rescheduled our visit to Timberland Swamp for Tuesday, April 17, at 1:30 p.m. following our 10 a.m. hike at Rizor Memorial Nature Sanctuary. Don’t forget to call the office and let them know we can look forward to having you join us at either or both sanctuaries. Maps will be provided at Rizor to help you find the easiest route to Timberland. It will be about a 45 minute ride from Rizor to Timberland. After all this rain, waterproof boots are a must. Insect repellant would be a good idea as well.

Don’t forget your brown bag lunch! Drinks and dessert are provided courtesy of MNA. T-shirts and passports will be available at all sanctuaries. Souvenir t-shirts are just $15.00 each, or free with a $100.00 pledge to MNA (plus a cool photo book of the visits at the end of the entire tour).