At MNA, we believe conservation is a yearlong commitment. Just because it’s winter doesn’t mean that our role conserving Michigan’s natural habitats is on freeze. Staff and volunteers find many ways to keep busy at sanctuaries when the temperature drops- they just make sure to dress warm and bring along hot cocoa!

What do we do in the dead of winter?

If you don’t need it, burn it. We burn brush piles to make it easier to conduct prescribed burns at our sanctuaries. In low-nutrient ecosystems such as prairie fens, brush piles are a source of Nitrogen and can be disruptive to the ecosystem. 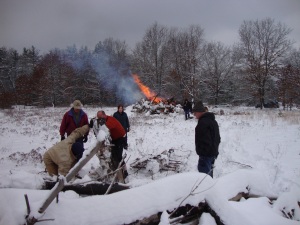 It’s best to remove woody growth in the winter because there’s less potential for wildfire, and some blazes can be massive. There are tentative burns scheduled at Goose Creek Grasslands, Lefglen Nature Sanctuary and Campbell Memorial Plant Preserve, and volunteers are always needed. If starting a fire in the name of Mother Nature sounds interesting, contact regional stewardship organizer Matt Schultz for more information at mschultz@michigannature.org.

Invasive species suck. But thanks to our trusty team of stewards and volunteers around the state, pesky invasives don’t stand a chance at MNA’s sanctuaries. Ruthlessly extracting uninvited visitors protects from competition and habitat destruction, a major threat to the quality of many sanctuaries. The primary culprits are glossy buckthorn, honeysuckle and dogwood. To find out about

volunteer days near you and help rid our natural areas of these troublesome species, view our event calendar.

While we love herbivores, their hefty appetites can impact the diversity of our sanctuaries. To prevent animals such as deer and rabbits from turning our flora into a 10-course meal, we actively measure browsing on trees and shrubs. Monitoring browse pressure is a suitable task for winter because there’s typically more available field time due to chilly weather. If you’re interested in finding out more, keep a look out for the browse pressure article in the April newsletter.

As the temperature falls so do the leaves, which makes landscape visible and convenient for boundary marking. One of the main responsibilities of MNA volunteer stewards is to annually check that sanctuary boundary markers are in

place. Bare trees allow for a clear view of woody areas, but with one drawback: it’s easy for posts to become hidden in the snow. If being a steward sounds rewarding, join the dedicated MNA team! Click here for more information.

For a list of recreational activities such as winter hikes, snowshoeing and ski outings, check out our calendar.

It’s time to decide who will guide MNA through the coming years. As we determine who will serve on the Board of Trustees, we recognize that without their leadership, MNA’s growth wouldn’t be possible.

Check your mailbox for a ballot and biographies of the Trustee candidates. Mark the box next to the candidate(s) you wish to vote for and return the stamped envelope to MNA by March 1 at 5 p.m. You may vote for up to three people.

Results of the election will be announced at the annual Member’s Meeting on April 9.

Thank you for your help in deciding who will lead MNA into the future. If you have any questions about the election, contact the MNA office by emailing michigannature@michigannature.org or calling 517-655-5655.

Nearly two dozen people braved the cold in the U.P. on Jan. 9 to participate in a cross-country ski outing hosted by MNA.

The event, held at the Eagle Harbor Conservation Area in Keweenaw County, encouraged participants to enjoy the outdoors and experience three of MNA’s sanctuaries. 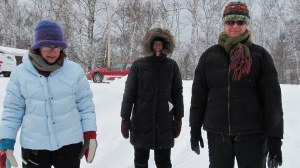 “I found it particularly rewarding that so many people participated,” said steward Nancy Leonard, noting that a good portion of the crowd had never skied on the Eagle Harbor Township trail before and knew little about it.

And those already familiar with the trail had the opportunity to learn more about the surrounding sanctuaries, Leonard added.

“It was great to have the opportunity to familiarize them with the three MNA sanctuaries that happen to be strung together along the trail,” Leonard said, referring to Eagle Harbor Red Pine Dunes, Dean Webster Memorial and Cy Clark Memorial.

Eagle Harbor Red Pines Dunes consists of 25 acres of sand dunes and connects to Cy Clark Memorial, which stretches 37 acres and is covered in cedar, black spruces, red maple and other plants. The Dean Webster Memorial is 12 acres.

Some participants, such as Mary Eckhart of Chassell, said they enjoyed learning about MNA and intend to become members.

Stewards will lead a snowshoe hike at Keweenaw Shore and Upson Lake Nature Sanctuary on Sunday, Feb. 13, from 2-4 p.m. Email Nancy Leonard at nancy@einerlei.com if you are interested in participating.

Check out coverage of this event in the Mining Gazette.

Throughout much of the world, swine function as part of a healthy ecosystem. The recent emergence of feral swine in Michigan, however, has many people trying to figure out how to get rid of yet another uninvited visitor.

With the state moving to declare feral swine an invasive species, it appears efforts to eliminate the population will soon ramp up, but what exactly is it that has people seeing red over feral swine?

Firstly, they aren’t native to Michigan. Feral swine currently causing concern are either pigs that escaped from livestock operations or wild boars imported from overseas to provide recreational hunting opportunities.
The wild boar is native to much of Europe and Asia, where it serves an important role as both predator and prey. In Michigan, though, they face few predators and pose serious threats to both the environment and agriculture.

A primary concern about feral swine is that, as voracious foragers with few enemies in Michigan, they may overrun native species that depend on a similar diet. Feral swine are opportunistic and omnivorous feeders. They dig up large tracts of land searching for roots, nuts and berries, having a negative effect on agriculture, water and soil quality. They are very efficient reproducers with large litters, a short gestation period, young age of maturity and the potential to have two litters in one year. Feral swine also harbor parasites and diseases that pose a threat to people, pets, livestock and wildlife.

The wild boar is native to much of Europe and Asia, where it serves an important role as both predator and prey. In Michigan, though, they face few predators and pose serious threats to both the environment and agriculture.

At the same time that Michigan is seeking ways to eliminate feral swine, the animals are valued and even protected throughout much of their native range. Once threatened in Europe and Asia due to hunting pressure, recent resurgences in wild boar populations have been welcomed in England, Germany and Russia. In eastern Russia, boars are important prey for the threatened Amur Tiger. In Europe, they’re food for gray wolves and help keep rodent and deer populations in check.

In Michigan, though, many consider the feral swine to be a nuisance species. Later this year, feral swine will likely be declared an invasive species, which would make them easier to control. Hunters have been encouraged to kill any feral swine they see while hunting in Michigan for several years. Hopefully, efforts such as these will help reduce the impact feral swine have on Michigan’s wildlife and landscape. 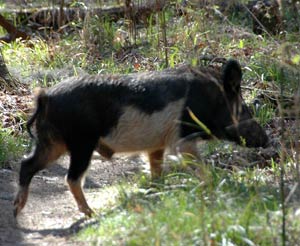