In North America there are only two species of cranes that can be found. First, the sandhill is the most common of all cranes and is one the four crane species not to be considered endangered. The other crane found in North America and the most at risk of extinction, is the majestic whooping crane. Standing almost five and a half feet tall with a wing span of more than seven feet, the “whooper” is the tallest bird in North America. The sandhill crane has become a common sight in the Jackson and Chelsea (Michigan) area with approximately 17,000 counted this year at an Auduban sanctuary. While in comparison there are less than 300 whooping cranes found in the wild (the 2010 estimate was just 263).

A wayward “whooper” has somehow found its way to the sandhill migratory resting place at the Phyllis Hanehnle Sanctuary just north of Chelsea, attracting birders from near and far. Standing among the sandhills the whooper is hard to miss with his distinctive coloration: bright white body, red crown, long dark legs and dark pointed bill standing out in contrast to the more subtle colored sandhills.

This bird is thought to be bird # 37-07 based upon the multiple leg bandings, meaning it was the 37th bird hatched in captivity in Wisconsin in 2007. At 3 years old he has reached maturity and with a lifespan of 22-24 years in the wild, scientists hope that he will mate and continue to help the endangered population grow.

Bird # 37-07 is part of “Operation Migration,” a non-profit group working with the Wildlife Service and other agencies to condition the young birds to fly behind ultra-light airplanes as they are lead from Wisconsin to their winter home in Florida. While it is a perilous journey for the chicks, with high rates of mortality in their first year of life, the project has brought back this magnificent bird from the edge of extinction in the 1940’s to a flock that is reproducing and growing in number. How fortunate we are to be able to see one right in our own backyard.

To learn more about the wildlife and habitats of MNA Nature Sanctuaries, click here.

Commonly referred to as the pine marten, the American marten was once believed to be extirpated in Michigan but now has a healthy population.

Records show the American Marten extirpated in the 1930s. However, efforts for their recovery began as early as 1958 and then redoubled in the 1970s.

After a recent review of the endangered species list, the marten was deemed recovered with a sustainable population.

The marten has a long slender body with glossy brown fur and a long bushy tail. A member of the weasel family, it ranges from 24-30 inches in length, including its tail. Like a cat, the marten has semi-retractable claws which enable it to easily climb trees. Relative to its weight, the marten has large footpads which allows for easy walking across deep snow.

The marten is most active during the night, early morning and late afternoon. As omnivores, martens eat both plants and animals. Mice, chipmunks, red squirrels, fish, frogs, insects, berries and nuts are on its menu.

Solitary creatures except for breeding, martens will mate with more than one partner in their lifetime. Males will defend a territory of one to three square miles. Born naked and blind, the marten will be full grown around 3 months old and shortly after are on their own from their mother.

The average lifespan of the marten in the wild is anywhere from six to twelve years.

The American marten was originally thought to only prefer coniferous forests, but now have been known to live in both evergreen and leafy forests.

The range of the American marten

Due to their highly shiny and luxuriant fur, the marten’s pelts were and still are highly desired. Now, strict hunting laws are in place to ensure the survival of the marten.

Deforestation is still a threat to the marten. Considered to be mainly arboreal, martens need dense forests for survival.

The American marten in the snow

For more information about the American marten in Michigan, click here.

Not only does MNA protect nature throughout Michigan, but at the Sauk Indian Trail Plant Preserve, a little piece of Michigan history is saved forever.

The Sauk Trail has witnessed magnificent changes in history. From glacial changes to population changes to technological changes, the trail acts as a worthy marker of history and its unyielding power as a force of time.

The land on the preserve was once part of the Great Sauk trail, which ran from western Illinois to Detroit.

Based on excavated evidence by paleontologists from the University of Michigan, some theories suggest that game animals were using the trail as migratory routes more than 10,000 years ago.

By the time Europeans arrived in Michigan in the seventeenth century the trail was already a well-established pathway through the wilderness. The trail roughly followed the line of abundant forests to the north as it connected with open grasslands to the south.

the Sauk Indian Trail through Michigan

With the construction of the Eric Canal in 1825, the traffic on the trail increased. Travelers would leave their boats in Detroit and continue west towards Chicago or other cities along the way.

The same year the canal opened, the United States appropriated $3,000 for the Sauk trail. As the second federal highway in the nation, the money was needed to accommodate for the large amount of traffic.

After the Civil War, the railroad system grew throughout the country. Recognizing the geographic sensibility of the trail, a railroad was constructed parallel to it bringing more wealth and affluence to the people and towns along the corridor.

With the railroad’s arrival, some small farming towns became industry centers. Washtenaw County in Southeast Michigan became one of the leading producers of wool in the country because of sheep raisers from England settling there off of the trail. Their wool would eventually be used for soldier uniforms in WWI and II and later for car upholstery.

Soon the automobile was the means of transportation in America and with it came the need for roads. In 1916 Congress passed the Federal Aid Road Act with hopes of constructing a highway system that could replace the railroad as the major means of surface transportation in the country.

wildflowers at the sanctuary

Since the construction of I-69 and I-94 across the state, traffic on US-12 has shifted allowing for history to be preserved and the route to still be used as a regional connector.

With the help of the Michigan Nature Association, 17-year-old Evan Harris is on his way to becoming an Eagle Scout. Currently Evan is a Life Scout and is working to complete the requirements for advancing to the highest rank the Boys Scouts of America bestow.

One requirement is for Evan to demonstrate his ability to organize and lead a service event. As a recommendation from his Scout Master, Evan contacted MNA Regional Stewardship Coordinator Katherine Hollins for project possibilities.

Some of the material Evan helped remove

Over two weekends, Evan’s service project will be to clean up the Looking Glass Nature Sanctuary near Bath. Evan, with the help of friends and fellow scouts, will be removing an old shed and a pile of debris that is interfering with the natural process at the sanctuary.

“Working with MNA has been a really smooth process,” says Evan. After an unsuccessful partnership with another organization in the summer, Evan has been happy working with Katherine and MNA volunteers.

“Katherine walked through the sanctuary with me to figure out what we could do.”

When selecting a project, protecting nature seemed only natural to Evan.

“It’s in the Boy Scouts of America slogan: Leave No Trace (basically not destroying stuff),” he said.

In addition to organizing a service project, Evan has worked to complete a number of merit badges including ones regarding personal fitness, community duty and citizenship. 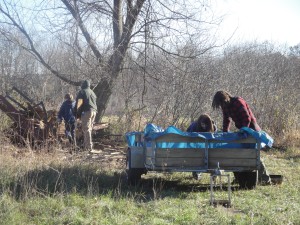 Evan and the crew work to clean the sanctuary.

Currently a high school senior, Evan would like to pursue music education at Central Michigan University after graduating.

For more information on service projects at MNA and how you can get involved, visit our website at www.michigannature.org.