One of the biggest threats to the Great Lakes is a 100-pound fish.

Swimming up the Mississippi River, Asian carp have the potential to destroy the Great Lakes ecosystems if they are not stopped.

Earlier this month it was announced that the U.S. Army Corps of Engineers will be spending an estimated $25 million dollars to study and prevent the Asian carp from coming any closer to the Great Lakes than they already are.

Blocking the Way
Currently an electrical barrier is in place at an entry point to the Chicago Area waterways to prevent the Asian carp from continuing into Lake Michigan.

Underwater electrodes create a barrier so that as a fish swims towards it, they have an uncomfortable feeling and swim back the other way.

The electrical barrier is the best large-scale method for prevention, but like any machine, it has the potential of temporary malfunctions. Scientists agree that other measures in addition to the barrier will need to be taken.

Disruptive Species
Asian carp are ravenous eaters. They eat plankton, stealing the main food source for fish. Asian carp share the diet of native fish, which now have to compete for food. Averaging 30-40 pounds, Asian carp can grow up to 100-150 pounds and can eat 5-20 percent of its body weight each day.

In the Mississippi River system, Asian carp are already problematic and showing signs of destruction.

In addition to disrupting the food web in rivers, Asian carp are cutting into the fishing industry. The commercial value of Asian carp is much lower than the native species they are replacing.

You wouldn’t think a fish could physically harm people, but Asian carp do. Because they are easily skittish, Asian carp will jump out of the water, potentially ten feet, when they hear a boat motor.

Asian carp jumping at the sound of a boat motor.

Having a 20 pound fish fly at you is not anyone’s idea of fun. One woman in Peoria suffered a broken nose and arm when on Asian carp hit her.

In their native China, Asian carp have predators which can keep them in check. In the Mississippi River and Great Lakes, there are no predators to challenge an adult Asian Carp.

More than the Great Lakes
Asian carp are not naturally big water fish. However they will still find home in the Great Lakes basin in the streams, vegetated shorelines and wide bays around Michigan. They will most likely stick to the coast for feeding and eventually inland to rivers in order to spawn.

MNA has more than fifteen sanctuaries on the west side of the state that could potentially be at risk in the near future. If the Asian carp were to penetrate the entire Great Lakes system, any and all sanctuaries that have a water system could have damage from the carp.

Getting Closer
Originally imported in the 1970s by catfish farmers, Asian Carp overflowed out of their ponds in the 1990s due to flooding and were accidently released into the Mississippi River. Since then, they have steadily progressed north.

Using a new method of detection, eDNA or environmental DNA, scientists have been able to detect Asian carp in the Chicago Area waterways, coming dangerously close to Lake Michigan.

eDNA, developed at the University of Notre Dame, is a method of detecting DNA from a water sample. Species, like Asian carp, release genetic material into the environment through slime, feces and urine—all of which can be detected in the water if caught soon enough.

For information on what to do if you find an Asian carp, click here.

On a crisp late fall morning in the Keweenaw, Ted and Alice Soldan, stewards of the Estivant Pines Nature Sanctuary, made their way north with a pick-up load of lumber, newly-sawn at their own mill.  By 10:30 am, most of the young student volunteers had arrived to meet Ted and Alice at the Pines and were chomping at the bit for the project to begin.  Nineteen young people, mostly MTU students from the service fraternity Delta Upsilon, and one from the Rotary group, Rotaract, came to spend their Saturday in service for “Make a Difference Day”.

The Estivant Pine Nature Sanctuary serves as the flagship sanctuary for the Keweenaw.  Even though it is tucked almost at the end of this remote northern peninsula, it is the largest by far, and the most visited.  Ancient giant white pines are scattered throughout and are easily seen from a well-maintained trail system.

Before the work begins, Alice posed the group in front of the MNA sign for a portrait.  Ted, in the meantime, organized the long support board timbers and the bundles of boardwalk steps into work site groups.  The goal for the day:  haul in the lumber for various boardwalk projects.

A student smiles while carrying lumber to the site.

Ted and Alice have hauled in lumber for years.  By the looks on their faces, it was obvious that they were totally pleased that younger bodies would bear the load this time.

Ted shared with the group an overview of the project at hand and explains why and how the boardwalks are built.  Then he directed the hauling to work sites, the most distant site being more than a mile from the trailhead.  In no time, the lumber was hoisted by the volunteers and hauled up the trail.

Students carry the wood to the sites within the sanctuary.

I followed along behind the group that has chosen the longest route, the one to work site four. Along the way, Ted pointed out a special tree, told a story and shared a quote from the likes of Edward Abbey.

Having finally arrived at the work site, the students were instructed as to how to stack the lumber and then how to camouflage it.  And rather than just turning back, Ted led the group on the rest of the trail loop.  At the Bertha D. Memorial Grove, the group was encouraged to sit a bit and relish being in the presence of giant pines. Ted shared more stories and more quotes; he obviously loves this place and the students picked up on it. 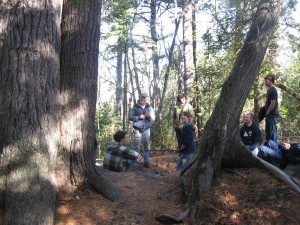 Students take a break and admire the giants that surround them.

By early afternoon, all the lumber has been hauled in, old lumber hauled out and deadfalls cut up and moved off trail.

As Ted says, “We walked out of the Pines …. leaving things much better than they were.” That, I would say, is called making a difference.